Overnighting in the Enchantments requires winning the lottery.

From May to October a limited amount of campsites are available; names are put in for a permit drawing, weeks of anxious waiting pass, then the winners cheers over beers to their good fortune and the losers shake their heads and keep their fingers crossed for next year.

This year, Carl won.  We would have from Sunday to Tuesday to camp in the Alpine Lakes Wilderness, climb boulders, eat freeze dried dinners cooked in bags, and swim in frigid lakes created by centuries of glacial melt. 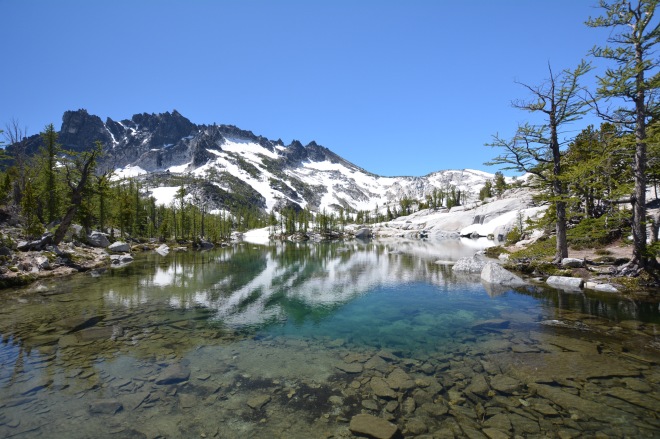 Four of us overnighted in Wenatchee the night before our trek.  “Whimsical” was how we envisioned the town.  Geographically tucked in the desert near the Cascades, where apple orchards pop up inexplicably in the otherwise barren land, we expected magic to find us there.  In reality, Wenatchee is more of a one road strip mall.

The brewery we chose for dinner ran out of mozzarella cheese at 6:00pm.  A real shame since the only thing on their menu was pizza.  As an emergency cheese run was underway we sipped beers with names like “Bimbo Blonde” and “Badonkadonk” — whose label featured a beer glass shaped like a woman’s derriere.  Twas not a feminist friendly establishment and our pizzas were ultimately cooked in a toaster oven.  A reality show named “My Big Gypsy Wedding” played us to bed in our motel ’til light reflecting off the Lowes parking lot next door spilled into our room in the morning. 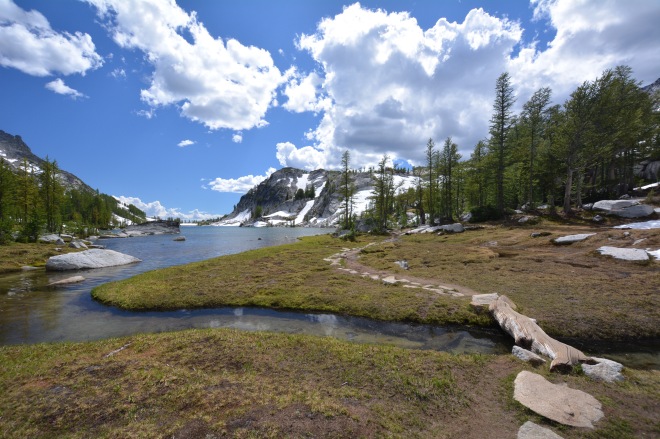 One massive diner breakfast and short drive later, we rendezvoused with the rest of our hiking party at the Enchantments parking lot, one of our friends pounding an IPA at 8:00am while the rest of us sunscreened up for our daunting hike to Snow Lake — Seven miles with an elevation gain of 4000 feet, that’s a 17 degree angle of up.  This is not an easy feat.  One of our friends broke their leg on this very climb just years before and needed to be helicoptered off the mountain to a nearby hospital.  They now have metal holding their bones together.  Not a very encouraging thought as we began our ascent in 80 degree weather.

Goats dotted the trail upwards. They rustled about in the surrounding bushes and paced back and forth on the trail itself, bahhhing out that you shall not pass.  Goats can be dicks.  While not a very intimidating-looking creature goats are known to charge, and the trail to Snow lake is series of switchbacks up a ridgeline, about 3 feet wide tops.  Simply going around the offending animals is not an option.  Rocks were thrown in their direction, a ruckus was made, inspired slogans like “Heeeyyy, Goat!” were shouted, and the cooking pot strapped to Carl’s backpack was beaten.

We attempted to keep track of how many goats we saw but soon realized there was no way of knowing if we were looking at a repeat goat.  In the end we settled on counting “goat sightings” which tallied up to 27.  From afar they’re pretty adorable, but at one point we did witness a mama goat bullying her way to a nearby camper’s lunch.

Years ago the idea of backpacking would have been laughable to me. I still toss at night when car camping and manage to be hot and cold at the same time in my sleeping bag.  I like fluffy pillows, a-line dresses and drinking campari, but during our time in Seattle, Carl has been eeking the mountain woman out of me one hike at a time. 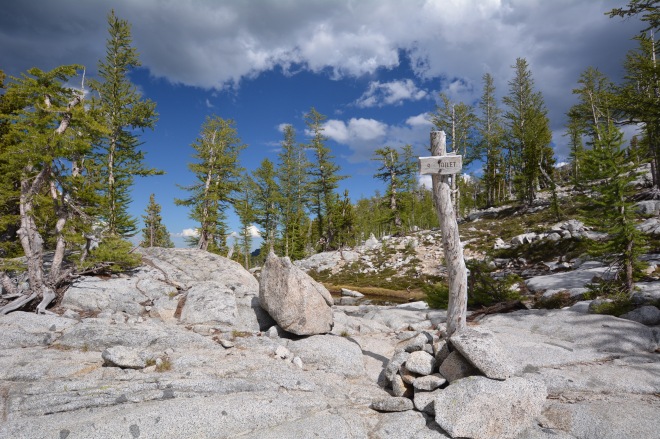 His push to get me out of bed at dawn and onto trails on Saturdays has taken me to the first time in my life when I can think to myself “A 12 mile hike is doable”.  And while if I’m being honest I did believe the Enchantments would literally kill me, I made it to Snow lake.  There we set up camp in a multi-unit campsite (can I call it that?  Or is that on par with calling the ground the “floor”?) which comfortably fit all of us in our own semi-private nooks.  We even had an en-suite (again, can I call it that?) beach all to ourselves — a big hunk of a rock that trailed out into the water from our site, gorgeous photo opportunities and the perfect launch point for jumping into the freezing waters awaited us there.

Only when the hoard of mosquitos that descended on us proved to have a vampire-like thirst  for blood did we finally leave the beach and retire to our tents.

Our path “up” did not end at Snow lake on this journey.  Oh no.  Day 2 of our hike would take us to the Core Zone of the Enchantments Wilderness, the big show.  A 10-mile round trip hike that would take us through rock scrambles blazing in the July sun, then up and over slippery snow fields.  Two years ago I could not have done this.  I would have hiked the first two miles only to be paralyzed by fear and cling to a rock while everyone else hiked up around me.  “Grab me on your way back in four hours!” I’d say, trying my bravest to keep the tears from pouring out.  Today though, I can do it.  I did do it. 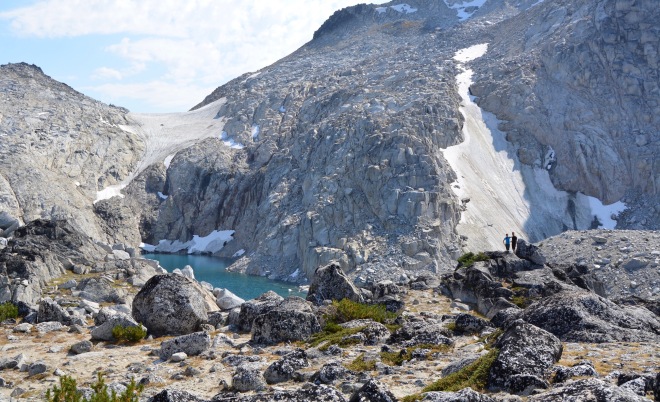 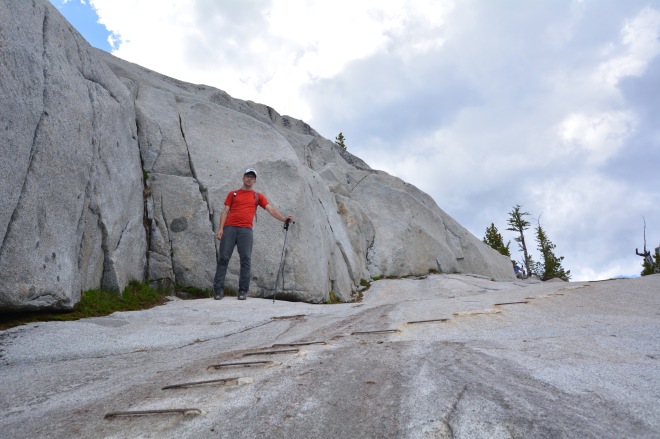 Only briefly did the trail get the best of me when we had to choose between jumping across boulders or stepping over wobbly rocks to cross a stream .  Otherwise though, I handled it.  Even over the rebar (a series of bars drilled into a rock wall at a 45 degree angle to prevent you from slipping to your doom), even over the first three snow fields we came across (everyone else noped out at the fourth one since apparently the snow didn’t stop past that point), I still climbed.

Not very exciting to some, but if life isn’t about trying to do something today that we couldn’t do yesterday, if it’s not supposed to be an endless opportunity to learn new things, then I would have been bored a very long time ago. 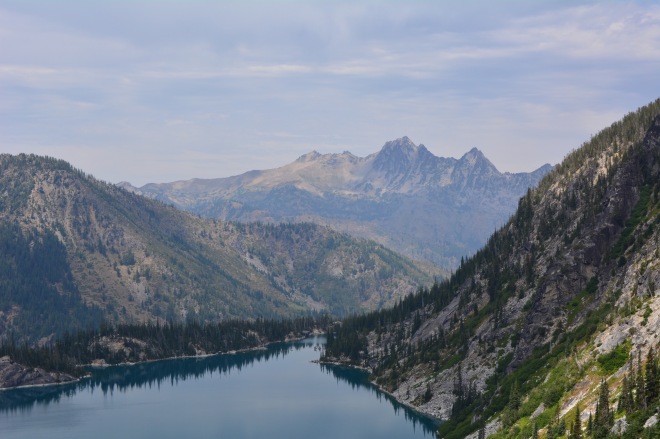 Back on our rock Carl and I cooked up the absolute fanciest meal we could: ramen that has a Japanese looking label (including Japanese characters and everything!) that’s actually produced in Cleveland.  It’s salty and amazing and as the gnats forming a halo over our heads divebombed into the brew I didn’t even care, and would have gladly sucked had more. Come morning we’d have to pack up our tents, drink down another mixture of half-coffee-half-hot-chocolate (am so not complaining about that part) then trek back down our mountain, rounding our three-day trip to 25 miles.

The way down is ugly.  Down is always ugly.  Going up is more physically grueling, but down is just a test in taking your time.  You want to run, you want to slide down on your butt, but when the trail is rocky and sandy and steep, going down slowly is an absolute must.  As we descended the sun became gradually more brutal too.  So very brutal that when we finally arrived back in the parking lot we cowered in the shade of the cars hatchback, sitting in the trunk ravenously drinking water and peeling off our wet socks caked in dirt and dry pine needles.

Leavenworth was beautiful.  But it was after lunch, after the beer and the currywurst, when we were on the road and pulled over to the pinnacle of Washington rest stops, that I found heaven.  Highways of the Northwest are lined with roadside drive-through espresso shacks; roughly the size of a toolshed, these shacks are a necessity for a mid-afternoon caffeine boost when you’re in the middle of nowhere.  Here I had what can only be described as an average iced americano that in the post-hike moment transformed into the best americano of my life.  Beside the espresso stand sat the cutest fruit stand you can imagine where Carl went prowling for peaches.  And between the fruit and the coffee was a row of sprinklers calling out to me.  I did not disappoint them.