The Earth is Flat! Bonneville Salt Flats and the Land of Pure Horizon

There is a place so flat and so barren that land speed records are shattered on its grounds; where you can go 600 mph in a turbojet propelled vehicle. Where no vegetation grows and the horizon line is the curve of the earth. 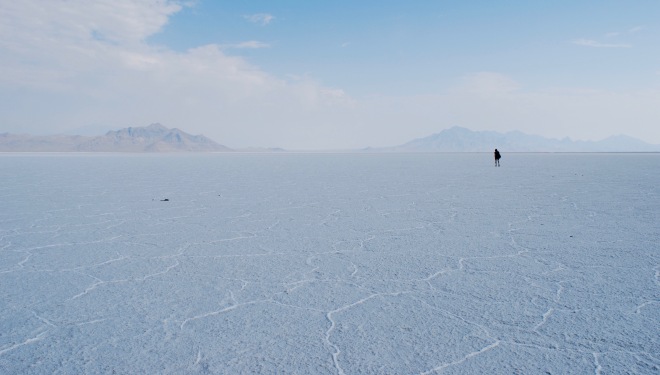 At the Bonneville Salt Flats there’s nothing to “do” but it’s worth the 1.5 hour drive from Salt Lake City to the land where the earth and sky are a stark contrast of white on blue.  There’s no entrance — along 80 West there’s a small pull-off, then voila! You’re there. You will already have seen the Great Salt Lake at this point, shallow and still, reflecting low and distant hills and a whole lot of sky.

On the way we passed salt mine after salt mine, including the actual Morton Salt facility.  When that yellow dress came into view it was worn by a Godzilla sized tween painted onto building facade.  She towered over mounds of salt, salt stacks tall enough to drown an elephant in.

Immediately upon seeing this I had a newfound understanding of a product I use every single day. People will shell out top dollar for the farm to table experience and will read a biography on the life of the cow they’re consuming or will listen intently while you tell them the amount of rain their asparagus saw during its growth, but we neglect the humble salt shaker.  Sitting quietly on our kitchen counters and dining room tables each day, this is the real hero of the plate. The giver of flavor, the curer of meats.

Head to the Bonneville Flats, and patterns of salt scale the ground. The earth is pushing the element between small crevices, causing cracks to bubble up like white scars. 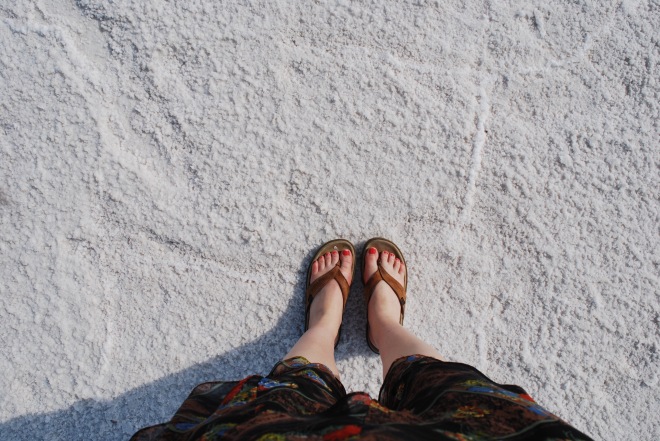 Since 1935, seventeen land speed world records have been broken at the Salt Flats.  Starting off at 300 mph with a Royce Royce equipped with a supercharged aero engine, turbojets and rockets have since exceeded 600 mph, flying into the record books. In the distance I can make out small dots framed by the surrounding hills.  Fellow flat visitors are dwarfed by the landscape and look like ants I could crush beneath my thumb. I would guess they’re over a mile out, but the eye isn’t adjusted to gauging distance in a level land and even when Carl walks ahead for a minute he looks impossible to reach. The amount of white plays tricks. 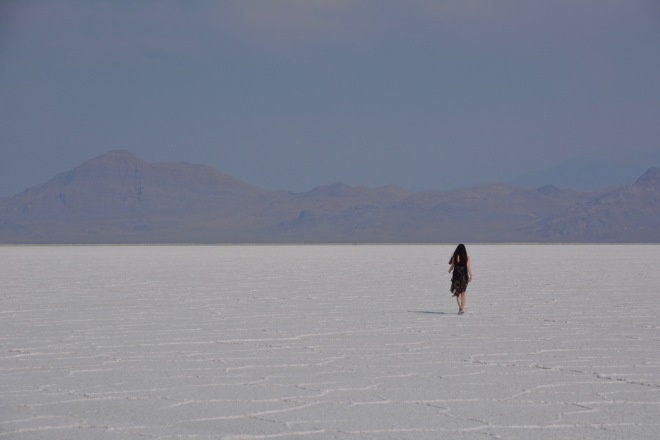 In total we spend roughly an hour exploring, stumbling upon tire treads patterned into the salt, golf balls and tees scattered about, and even find patches of urine stained yellow salt, usually drawn into a smiley face or spelling a name. None of our findings are truly surprising, even the stray condom. Despite being entirely in the open it’s a land of anonymity which visitors treat like their backyard, or even their bedroom.

It’s a liberating space, and on our drive back to Salt Lake I feel refreshed, even relaxed.  This is a hard state to reach on a road trip, but sitting amongst empty coffee cups and half filled water bottles I feel relaxed.  It’s a state comparable to picnicking in a field or sitting lakeside with a glass of iced tea. Your body seems to absorb the scenery, or maybe you’re the one who is swallowed by it. But there’s no competition at play.  You’re ready to become a part of the place. Some people commemorate that feeling by marking the territory, but for me, knowing that I was a dark speck on that white plain, even if only for the shortest time, is enough.