A grandmotherly woman in the ranger station traced routes on our maps with a red pen, writing in small dashed lines like the guides of a treasure map.  The process took several minutes as she described with a lispy voice where she was taking us: to Bandelier National Monument then Farmington New Mexico for the night, before we would journey to Monument Valley.  She was especially enthusiastic about Farmington, and when we left the station we carried stacks of maps and brochures for the area, which we still keep in our glove compartment because ya never know. 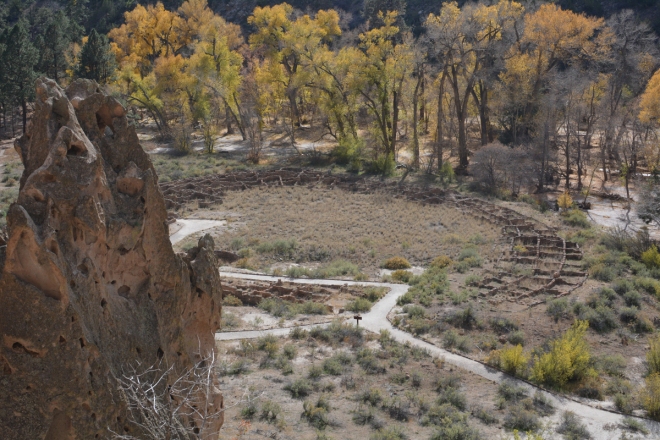 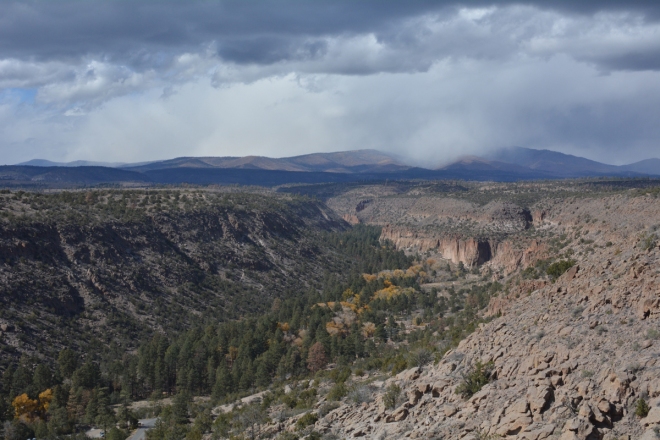 The drive into Bandelier is as beautiful as it is horrifying (for someone with a fear of heights).  You corkscrew around the side of a mountain while losing 1000 feet of elevation, and though I want to remember the views forever, most of the time I was thinking “just let it be over.” Once arrived, I felt immediate relief until (1) we were informed that some of the trails were washed out from flooding, (2) there was a flash flood warning in effect and (3) we saw ridiculously ominous clouds in the distance.

This led to me pestering Carl about his survival skills for the first half of our hike.

“How long could you keep us alive if we were caught in a storm?”

“I was an Eagle Scout of course I can build a fire.”

“What about food?  Do you know how to forage?”

“I know which berries are edible.  What are you going to do to help?”

“I have a granola bar in my purse, that’s what I’m bringing to the table.”

Bandelier monument preserves the dwellings of the Pueblo People who deserted the area 500 years ago, so I figured if we were caught in a wild downpour, at least shelter was provided for us.  Small nooks were chiselled into the rock walls where a crouching person could curl up, but rarely could standing be accommodated.  The ceilings are blackened from fires over the years, and the inner walls are textured and rough, with a carving here and there, a mid millennium means of decorating. 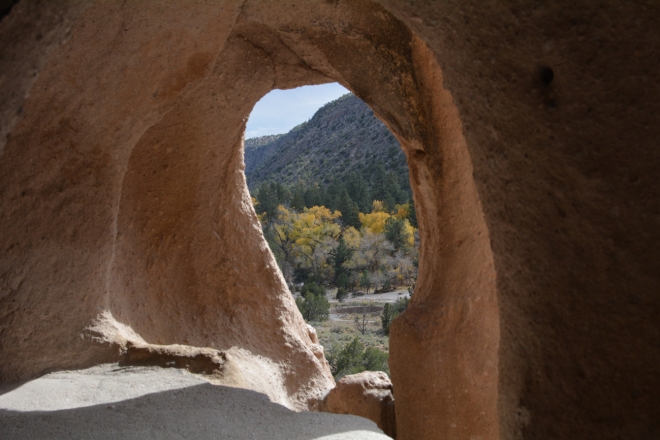 Access to these spaces is via wooden stairs nailed into the mountain, and even though I know the ladders are secure, I still don’t really know the ladders are secure (fear of heights and imminent death storm on the mind).  In the end I persevered and climbed up every damn ladder around, even up to Alcove House, which the National Parks site describes as consisting of “4 wooden ladders and many stone stairs.”  Worth it though because the view of surrounding Frijoles Canyon during late fall is on fire with burnt oranges and golden yellows.  After the descent and walk back, it was apparent that the storm had passed, which was indeed what I wanted, but I was a bit disappointed I didn’t spend more time in Alcove House and explore the underground Kiva (a room used for religious rituals and spiritual ceremonies).

Back on the road we didn’t have the same weather luck though.  We drove into a blizzard.  In October.  In New Mexico.  (Miss the rainstorm and you’ll wind up with snow.)  This situation would’ve seemed impossible to me prior to our trip, but I’d learned one often forgotten point of the area: the elevation will sneak up on you.  Soon we were driving in darkness, watching snowflakes streak the windshield.  Then I noticed flames burning off the highway.  Not a fire, just single flames appearing intermittently in the distance.

For a while I thought we were driving through a Cormac McCarthy novel, but I’ve since found out that we were witnessing flaring.  A process oil companies use to burn the natural gas found when drilling for oil.  Since oil is more valuable than gas, and the transportation of gas is expensive, the gas is just burnt off.  It’s a waste of resources (the amount gasoline burnt each day could easily heat all of Seattle’s 300,000 households for a day), it’s bad for the environment (over a million tons of carbon dioxide is released each year from flaring), and it’s eerie as shit when you have no clue what’s causing the 40 foot tall columns of flames. 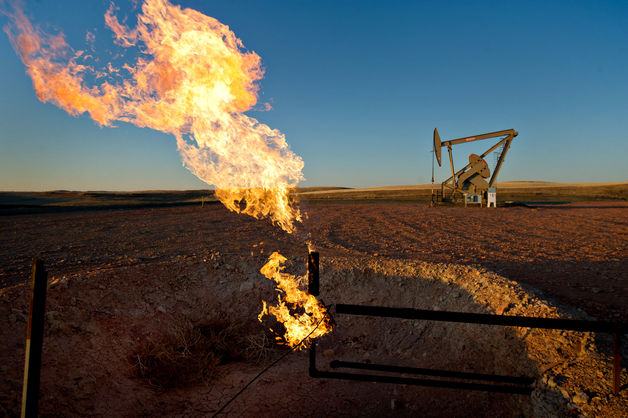 Since all the photos I took of this from the car came out terrible (obviously), I’ll use an image from Daniel Acker at Bloomberg.com to show what flaring looks like.  Now just imagine the flames in a dark, blizzardy desert.

All we could see was the snow in front of us lit with headlights, blackness everywhere else, and flames speckling the landscape.  It was one of those days where at no point you think you’ll actually get to your destination.

But around midnight we pulled into the hotel parking lot in Farmington, while signs announced a club connected to the hotel.  For your partying and sleeping needs!  Drunk driving is a huge problem in the region, since the closest bar tends to be miles and miles away from home, while cabs and public transit are nonexistent.  Having the walls of my room thwomping with bass all night was not an appealing prospect, but either it was a slow drinking night or I was too exhausted to notice the room pulsing, because I slept until woken by our 7:00am alarm.  At which point I rolled out of bed, had another continental breakfast of frosted flakes and black black coffee, then got back into the trusty passenger side seat for another day on the road.

Been missing going to my local @rowhousecinema terribly, so I decided to illustrate it. Can’t wait for the after times and its reopening! #pittsburgh #rowhousecinema
Ciao 2020 - to a more hopeful 2021 🤞
One proud 🥖 papa. We finally got past the bread boss of 2020 by making an Italian loaf #yeastbaby
2020 loophole! We put up a tiny greenhouse in the yard - Ideal for eating, drinking and getting “out of the house” in the months ahead
🟩🟨🟧
Social distancing, distantly
One year of marriage complete - From a company acquisition by Squarespace to quarantine, it’s been a big one. Then and now - Our Joshua Tree elopement, followed by our backyard pizza celebration (still can’t selfie)
Keeping busy in quarantine by working on street style illustrations from recent travels. First up is Cape Town, followed by Taipei (where COVID masks make an appearance!) #wanderlust #illustration
Made it home! Surreal to be back under these circumstances, but if I have to isolate I’m glad it’s here, and it’ll be nice to have this lil LEGO version of our home around when I can’t look at the house from the outside.
Travel Update: Welp, overnight Morocco stopped all international flights in/out of the country, so as of right now we’ll be holed up in Marrakech until an unknown time. Each day has brought changes and there’s not much we can do except wait for an update from the U.S. consulate of Morocco who is releasing information via tweet, because that’s how things work now. Businesses and schools are closed across the country, but rest assured we have a place to stay and toilet paper. The most appropriate photo for all of this feels very “a cat and a blue wall” #travelinthetimeofcorona
Travel Update: Our initial honeymoon itinerary had us spending a month in Europe. Four days ago we planned to reroute and head to the U.K. before coming home a few weeks early. A lot can happen in four days though. After the travel restrictions and advisories kicked in the earliest direct flights to the US from Morocco skyrocketed to $5,000 a pop and the number of departing flights has been slashed. For now, we’ll be in Morocco for the coming week hoping that the flight we have to D.C. will fly. Until then, I’ll continue to wash my hands religiously and will do my darnedst to enjoy the things I see along the way #travelinthetimeofcorona
M O R O C C O #travelinthetimeofcorona
Did a good bit of rock scrambling to make it to the top of Lion’s Head, but being above the clouds was dreamlike.
When Carl takes surprise photos I don’t do my usual squidgy eye thing. Also the changing houses on South Africa’s coast are really pretty.
Penguin beaches are 10,000x more adorable than regular beaches