My 5 Most Beautiful Hikes in Washington

Washington is stupid beautiful.  I’ve never considered myself the outdoorsy type, but in this corner of the country it’s hard not to be.  Seattle’s style I’d describe as “REI chic,” and on the weekends city-dwellers drive up the mountains, down to the shores or into the woods for adventure: to hike, rock climb, camp, trail run, clam and mushroom hunt.

Within just a few years in the area I’ve hiked pieces of the Pacific Crest Trail, trekked through burnt-down forest, backpacked to Alpine Lakes, and have seen so many waterfalls I’ve become almost indifferent to them.  I hate to pick favorites, but if you’re heading to the state and don’t know where to lace up your hiking boots, I have a few recommendations.

There’s no shortage of lakes outside of Seattle, but if you’re looking for a “lake hike” then Pear is your man.  In the summer you’ll pass neverending and ripened blueberry fields, views of Glacier peak to the North, and even a burnt down Wenatchee National Forest for a post-apocalyptic landscape; you’ll even spend a few miles on the Pacific Crest Trail, the West’s equivalent to the Appalachian. 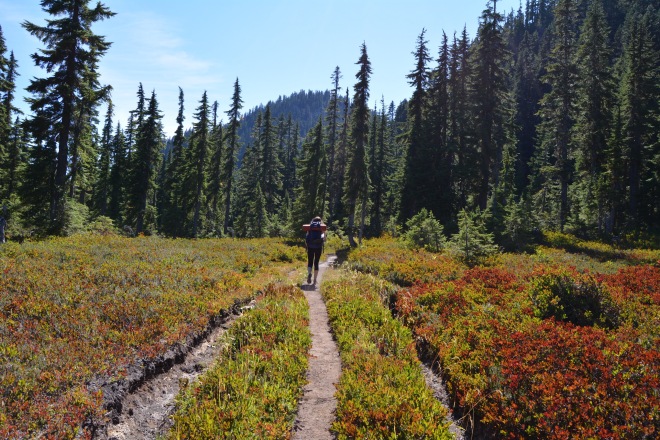 Pear is quieter than many of its lake peers; it’s further outside the city than the more popular Lake 22 or Mason Lake hikes and has a longer round-trip journey at a little over 14 miles.  Being less frequented there’s no fighting for a campsite and our overnight spot included a rock wall for privacy and our own babbling brook (perfect for chilling the 6-pack you lug in).  Early morning the meadows are flooded with light and the colors are absolutely autumnal. 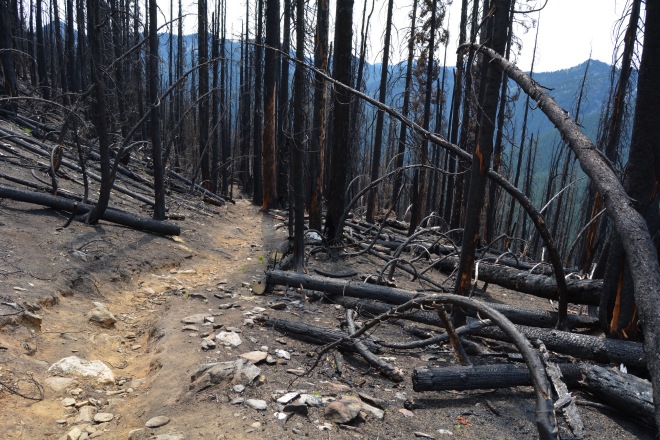 Bonus tip: The drive from Seattle takes you onto Highway 2 and just after Gold Bar you’ll pass School Bus BBQ.  Everything your body was missing on the trail is right here, from ice cold sunny delight and buttery cornbread to tangy cole slaw and salty ribs.  The dining car is a spiffed up yellow school bus, equipped with checkered tablecloths topped with fake flowers and everything.  Located next a the Reptile Museum (seriously) it’s hard to miss.

Olympic National Park has many must-see destinations: Hurricane Ridge to the North provides views of mountains cascading into mountains, and Second Beach is the epitome of the Northwestern rocky Pacific shore, but Hoh is the “if I can only do one” kind of stop.  While “rainforest” usually brings to mind images of the Amazon, Hoh fits the definition and is nestled in upstate WA.

It’s some Jurassic Park kinda shit. Ferns grow taller than I do and mosses hang like chandeliers on centuries-old-trees.  All green everywhere, nowhere else in Washington do I feel so incongruous with my surroundings. While wearing a chambray shirt I feel like I’m overdressed for dinner (my hosts graciously accept the wine I’m bringing, but all the while are thinking “bitch, who does she think she is?”).  I don’t mind this feeling of being judged by trees though, if anyone has a right to think they know better it’s probably a Sitka Spruce that could be Eisenhower’s grandfather. 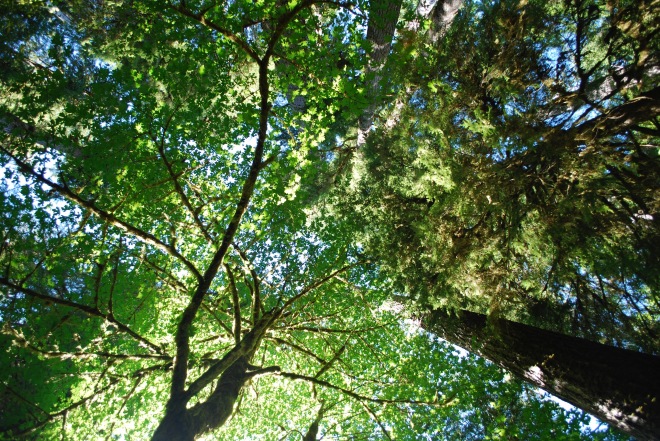 Bonus tip: The closest town to Hoh is Forks, the setting of the Twilight series.  As a non-Twilight reader this place mystified me; Forks made its money from the timbering industry, but as timbering is dying out Twilight tourism is taking its place.  Hardware stores have Edward posters displayed next to torque wrenches and shoulder bolts, and the local neighborhood retailer has a Bella standup wedged between standups of the series heartthrobs (Bella’s face is cut out too, allowing you to assume her place in photos). Sitting at the diner I eat a piece of pie next to a 70-year-old timberer in suspenders who’s chomping down a chicken fried steak, and a group of choker-wearing spiky-haired 25-year-olds in Twilight tees sipping coffee.

Situated in North Cascades National Park towards the North, this hike is aptly named.  Your view spans borders and you can see forever.  Nowhere else have the clouds looked like this —  light and fluffy around the edges and opaque in the center.  Mount Baker dominates the skyline, the mountain king in the mountain range. It’s a short and sweet hike at 4 miles roundtrip with only 1,000 feet of elevation gain.  In the winter months this is a prime snowshoeing destination.  Spectacular all year round, but I’m sure that when covered in feet of snow the views would be jaw dropping.  Regardless of season, if you can go, then go.

Bonus tip:  Artist Point nearly straddles the U.S./Canada border, a great excuse to make a weekend trip to Vancouver prior to the hike.  In the city be sure to visit Stanley Park for a waterfront walk, Granville Island for quirk-tastic and artsy vibes, and La Belle Patate for the best poutine in town.  Trust me on the poutine. I spent the weekend in a potato-coma after eating 3 completely starch-and-curd-based meals in 72 hours and this place takes the gravy cake. 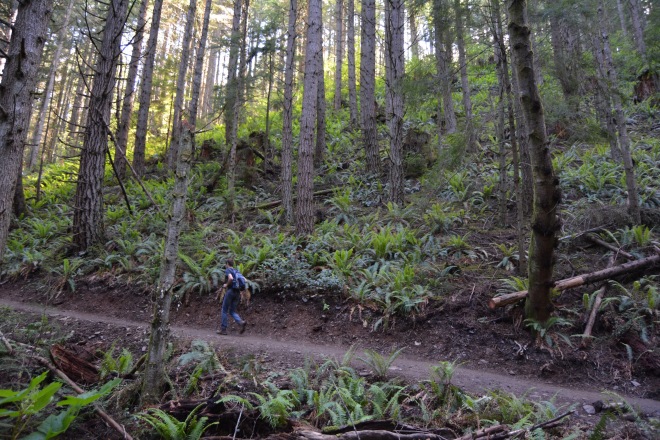 Come during the week if you can, and early in the morning just after the sun has risen.  Oyster Dome is overridden with trail runners and tech teams on work retreats on weekend afternoons, but come at an off-time and you’ll be alone with the ferns, with the rising sun pushing through the forest, illuminating the bottoms of trees and creating its own horizon line. For those looking for a shorter hike, this is it, clocking in at a little over five miles; and for those looking for views, look no further.  Oyster overlooks the Puget Sound, San Juan Islands and the Olympic mountains.  Perfection when you’re solo on the trail, but on a Saturday afternoon in June you’ll spend more time trying to untangle passersby’s dogs from your legs than you will enjoying your surroundings. 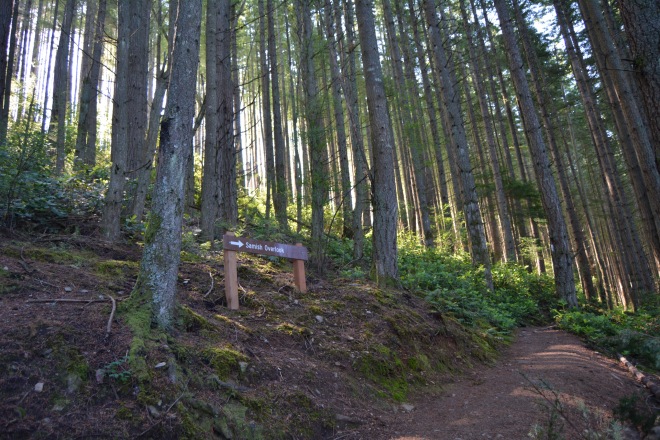 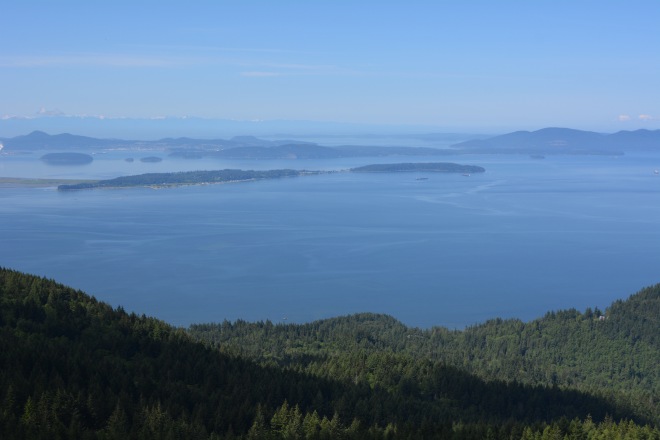 Bonus tip:  If a midweek day off can’t be arranged, make the drive up to Bellingham on Saturday afternoon, lazily winding up lovely Chuckanut Drive on the way.  With the sound to your left and forest to your right, stop at The Oyster Bar along the route for a tray full of oysters and a cold beer, just don’t forget to ask for a seat outside to take in the can’t beat water view.  Keep the good times a comin’ after you arrive in Bellingham by checking out Structures and Aslan Brewing, but head to bed early because you’ll need to be up at sunbreak to get started on that half-hour drive to the trailhead. 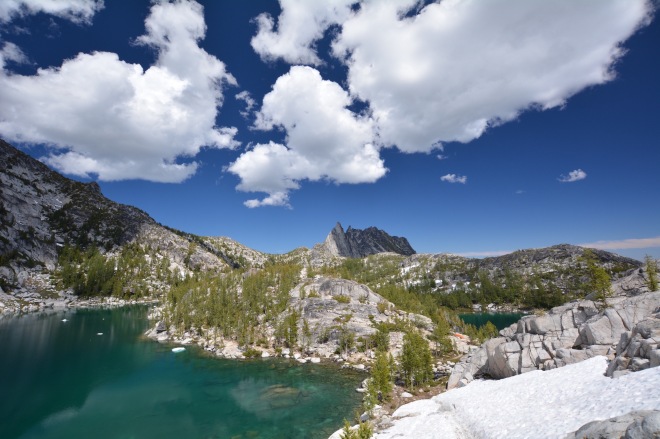 To overnight the Enchantments you need to win the lottery.  No joke.  This trail is so sought after and has so few camping spots that names are put into a lottery in Spring, and winners are drawn at random.  Keep your fingers crossed for this one.  Each step along the trail feels positively fairytale-like; you’ll pass dozens of mountain goats (if you told me five years ago I’d need to shoo away goats from my walking path I’d be a tad skeptical), pristine snowcapped peaks, and ice cold alpine lakes that mirror the landscape with Rorschach like precision.  Easy, it ain’t.  The hike to our campsite at Snow Lake was seven miles with an elevation gain of 4,000 feet.  That’s a 17 degree angle of up.  And if you want to venture into the Core Zone of the Enchantments (you do) that’ll take you to the 25-mile mark. 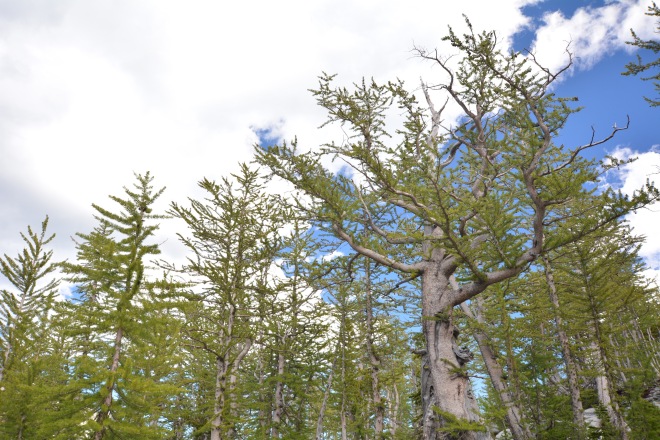 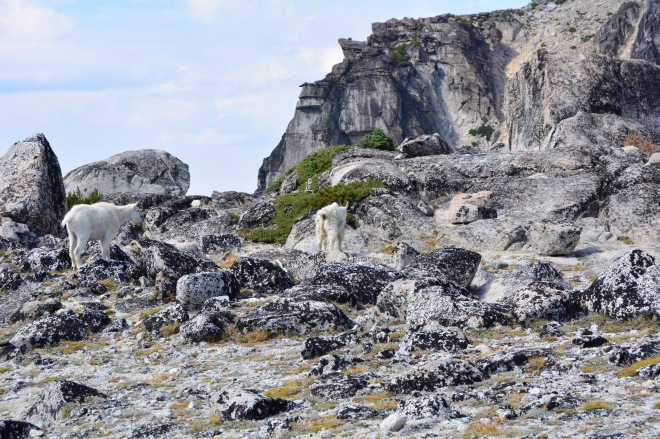 Bonus tip:  We caught the trailhead outside of Leavenworth, a Bavarian themed town tucked into the Wenatchee National Forest.  Here you’ll find Ye Olde’ Starbucks and a dozen trinket shoppes, but you’ll also find the München Haus beer garden, and oh-what-a-garden.  After a hike spanning three 90 degree days this place is Nirvana; outdoors and sheltered by sprinklers misting the drinkers below, you’ll revitalize your body by noshing on salty pretzels and downing a liter of hefeweizen.  Don’t dare attempt the drive back into the city without parking down on a bench here first. 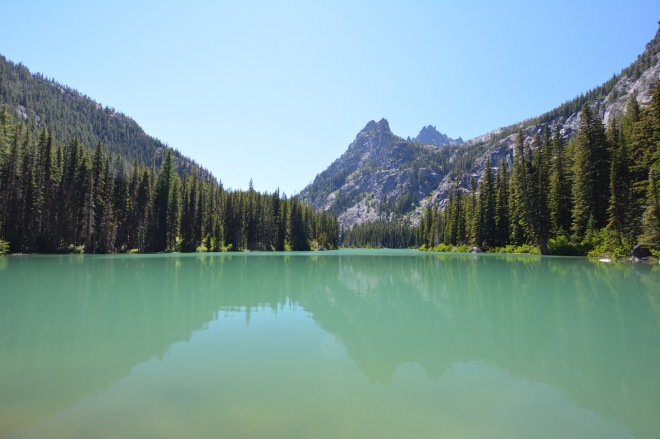 It’s been three months since she came into our home, but had to share just how much I love our girl, Salty 🧡🐶😍
☁️☁️☁️
Been missing going to my local @rowhousecinema terribly, so I decided to illustrate it. Can’t wait for the after times and its reopening! #pittsburgh #rowhousecinema
Ciao 2020 - to a more hopeful 2021 🤞
One proud 🥖 papa. We finally got past the bread boss of 2020 by making an Italian loaf #yeastbaby
2020 loophole! We put up a tiny greenhouse in the yard - Ideal for eating, drinking and getting “out of the house” in the months ahead
🟩🟨🟧
Social distancing, distantly
One year of marriage complete - From a company acquisition by Squarespace to quarantine, it’s been a big one. Then and now - Our Joshua Tree elopement, followed by our backyard pizza celebration (still can’t selfie)
Keeping busy in quarantine by working on street style illustrations from recent travels. First up is Cape Town, followed by Taipei (where COVID masks make an appearance!) #wanderlust #illustration
Made it home! Surreal to be back under these circumstances, but if I have to isolate I’m glad it’s here, and it’ll be nice to have this lil LEGO version of our home around when I can’t look at the house from the outside.
Travel Update: Welp, overnight Morocco stopped all international flights in/out of the country, so as of right now we’ll be holed up in Marrakech until an unknown time. Each day has brought changes and there’s not much we can do except wait for an update from the U.S. consulate of Morocco who is releasing information via tweet, because that’s how things work now. Businesses and schools are closed across the country, but rest assured we have a place to stay and toilet paper. The most appropriate photo for all of this feels very “a cat and a blue wall” #travelinthetimeofcorona
Travel Update: Our initial honeymoon itinerary had us spending a month in Europe. Four days ago we planned to reroute and head to the U.K. before coming home a few weeks early. A lot can happen in four days though. After the travel restrictions and advisories kicked in the earliest direct flights to the US from Morocco skyrocketed to $5,000 a pop and the number of departing flights has been slashed. For now, we’ll be in Morocco for the coming week hoping that the flight we have to D.C. will fly. Until then, I’ll continue to wash my hands religiously and will do my darnedst to enjoy the things I see along the way #travelinthetimeofcorona
M O R O C C O #travelinthetimeofcorona
Did a good bit of rock scrambling to make it to the top of Lion’s Head, but being above the clouds was dreamlike.