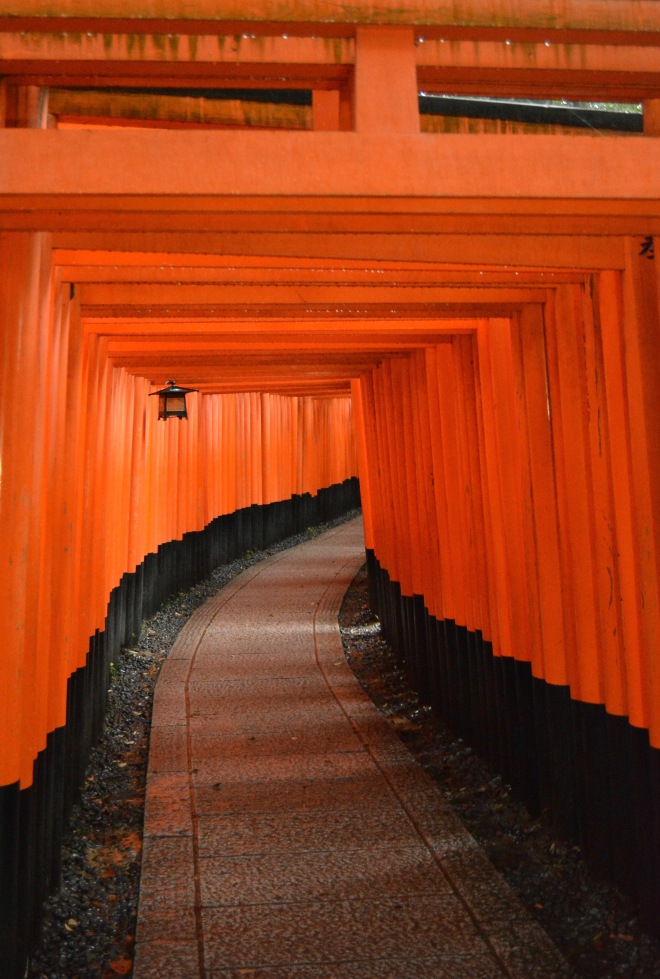 An Afternoon Abroad with a Poor Choice of Footware

Bubblegum is holding my shoe together.  The black perforated flats I packed have proven to be a bad choice, and the last week of walking through Tokyo’s streets on 90 degree days has caused my skin to swell into each tiny puncture, leaving my feet with a perfectly red and symmetrical polka dot pattern of callouses.  It’s painful and horrifying to look at, but in the Arashiyama bamboo forest my shoes couldn’t take it anymore, and one foot’s sole separated from it’s body, causing my steps to make a constant thwack thwack thwack sound. That is until I had a cartoonishly brilliant idea.  Gum.

Earlier that day I inspected my flats on the subway ride from downtown Kyoto.  Seeing that all-out devastation was imminent, I was hoping they’d hold out until days end.  Especially since our first stop involved a hike up to Iwatayama Monkey Park, home to over a hundred macaque monkeys. 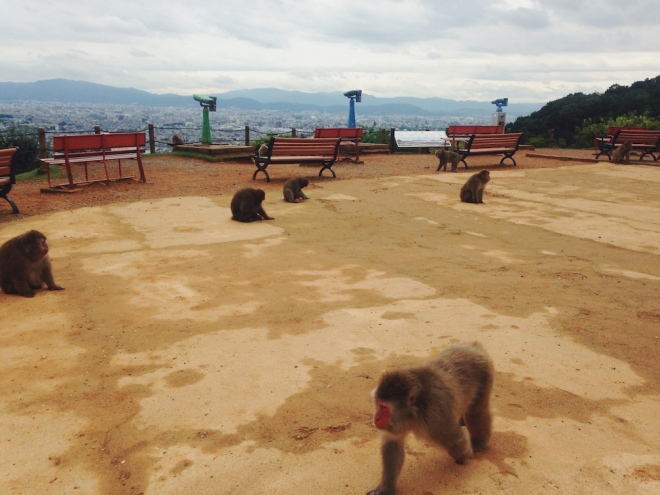 The uphill journey took only about 20 minutes and stationed along the dirt path were fans misting water, which seemed unnecessary, but given that most of the park’s 1-star reviews on Trip Adviser went something like “almost died walking”, it wasn’t too surprising.  I can understand the park’s desire to make its foreign visitors feel comfortable, and themselves less worried about carting heat stroked Americans down the narrow pathway.

Signs posted during our walk cover the three basic rules for when we meet our monkey friends:

1) Do not touch the monkeys.

2) Do not feed the monkeys outside of the designated feeding area (this encourages them to misbehave towards people).

3) Do not stare a monkey in the eyes, as it’s seen as a sign of aggression.

Up top, the designated feeding area is a small wooden building with screen-lined walls, where bags of peanuts and apples are sold to visitors as monkey food.  With our new bag of goodies we stood near the screens and within seconds macaques flocked around us.

The screens have large enough holes where tiny little monkey arms can fit through to reach their offerings.  A mama with a baby latched to her reaches out and grabs the peanut I’m holding in my outstretched hand.  I feel the little fingernails scratch against my palm.  I’m elated beyond belief at this, then another monkey bites her in the butt in an attempt to steal the nut.  Both parties begin screeching at the top of their lil’ lungs shattering the tranquility of the moment and I’m panicked and horrified, in fear I’ve broken some sort of natural balance.  Will I be asked to leave the monkey park?  Will I be kicked out of Kyoto?  Out of Japan?  The peanut vender isn’t phased by this clash though, so it’s apparent I’m free to distribute my remaining nuts to the other 140 surrounding primates.

Here’s what I learned from our time at the park: monkeys are bullies.  After the feeding we wander through the park grounds watching the monkeys clean one another, feed one another, and cradle each other in their arms, but mostly we watch them fight.  Their screeches are merciless and a new fight breaks out every four minutes or so.  I would imagine the fights involve establishing territory and some monkey hierarchy I cannot fathom, but mostly they just seem to arise out of boredom.  The dominant shrieking for another foot or two of space that once gained they immediately relinquish.  Monkey Alexander wept, for there were no more worlds left to conquer.

As we make our descent and head towards Arashiyama’s famed bamboo forest my flat’s sole starts to separate and I’m acutely aware of every step I take, hoping I don’t tumble down the path and wake with a monkey cleaning leaves out of my hair.

So here we are now.  Standing in front of one of the most photographed sites in the world.  The kind of place your instagram feed drools for.  Where you imagine you’ll have some sort of spiritual epiphany.  It’ll be green and serene and the only thing you’ll hear is the sound of dew dripping from bamboo leaves.  I mean, I knew it wouldn’t actually be like that, as nothing is ever the way you fully expect it to be, but there are cars driving through the bamboo forest.  Pedicabs too, full of women taking selfies as young men pull them through the grove.  Photographers nearby are getting huffy with their tripods since they can’t get a people-free shot, but I’m feelin’ fine as my gum patchwork job seems to be working.

No longer tripping all over myself or announcing my presence with an impending slapping sound, I feel victorious and strut around, while Carl takes about a dozen or so photos of me where my eyes are inexplicably always shut.

In the subway station we order some Manneken waffles as a snack.  Japanese custom frowns heavily at eating on public transit, so before the next train arrives we shove as much of our pistachio and maple waffles into our mouths on the midway as humanly possible, making sure no one’s around as we do so.  The next destination for the day is the Fushimi Inari-taisha Shrine, one of the most popular Kyoto sights.  Famous for its orange torii gates, thousands of which create a pathway snaking up Inrai mountain.

When we roll into Inari station, everyone departing the train crosses the street to the shrine.  This mob then enters the gates together, wandering in one mass through the passageway that’s about six feet wide.  This group links up with the last train load of people who join the train load in front of them, a roving centipede with it’s hundreds of legs but no one pushes or touches those near them, as the Japanese are all about maintaining personal space and order (which I friggin’ love as someone who’s crowd phobic).

Then suddenly the group splits.  The majority transfer over to the short route, while the minority push onwards up the mountain.  I will admit here that when looking into the shrine I knew it was a pretty passage of gates, but I didn’t read how the pathway was 4 kilometers long.  2.5 miles.  This I learn the hard way as we climb up, seemingly to no end, in the oppressive heat.

Along the route are rest stops selling hot soup, and soft serve ice cream whose flavor was translated as “carbonated lemon-flavored soft drink”.  Dotted at these stops were the most common of sights in Japan, vending machines.  Over our last week here we’ve come to love a beverage called “Pocari Sweat”, a beverage advertised as an “ion supply drink”.  It’s a light, sweet energy drink, and since it’s insanely hard to find actual water in vending machines, our absolute best friend in this humidity.

All this time I’ve been wearing a loose black t-shirt with a fitted tank underneath.  Since the tank is a synthetic fabric it’s been storing every single drop of sweat in it since the day began.  I look to the left, right, then left again, and seeing the coast is clear I shimmy the tank down over my pants.  This is done under the gaze of a dozen fox or kitsune eyes.  These statues are everywhere, as the kitsune is said to possess the power to ward off evil.  They work as messengers for Inari, the deity of rice, whom this shrine was created in honor of.   I’m acutely aware this is not my most proud day but I’m beyond caring.  I feel immediate relief and nod a thanks to the foxes around me for preventing any passersby from seeing my hasty change, then clamber up another set of stairs.

After an hour of constant elevation gain we’re at the top of the mountain.  Carl and I high five and chest bump.  We chug the last remnants of our bottle of sweat and begin our descent.  We feel glorious and outstanding.  Then the rains came.  They came fast and hard and though in photos these gates may look like they provide excellent shelter they don’t.  They really really don’t.  There’s a massive gap between one gate to another, so we leapfrog it down the mountain.  Grateful for the newfound coolness, equally delighted and annoyed by our dampened state.

My brilliant bubble gum macgyvering was no match for the downpour, and as the very first drop hit I knew it was game over.  For the second time that day the sole broke off halfway down the shoe and hung limply about, smacking and thwacking with a new-found energy I couldn’t bridle.  I was anxiously awaiting the moment when I could throw the damp and disgusting traitors into the hotel trashcan.  Pressure from all the days walking had pushed gum out through the space between the sole and shoe bottom too, and off-white globs oozed outwards towards freedom and coated the flats and the sole flapping erratically about.

Looking at another mile yet to go I was exhausted and soaked but was also damn aware that an impromptu shrine hike during a rainstorm with a defunct shoe was an infinitely more interesting experience then a pleasant stroll and brief lookabout.  So down we went. 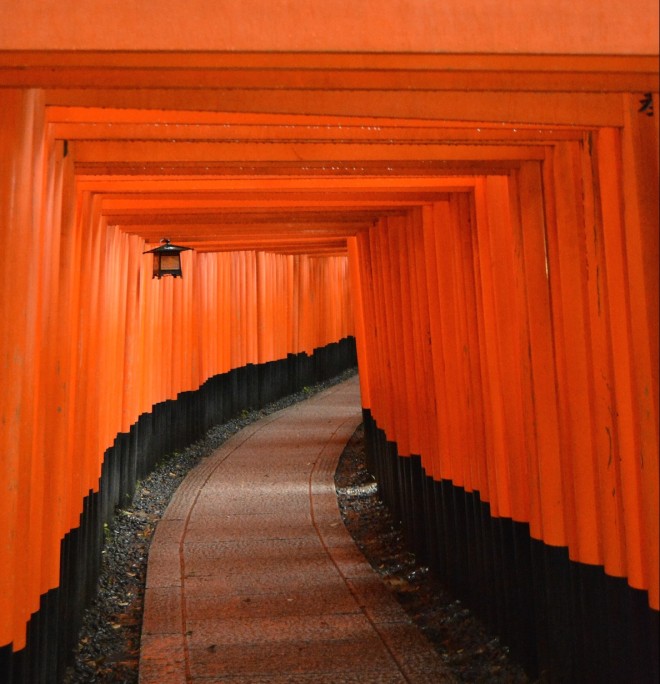 The rain begins to abate as we reach the shrine’s entrance, currently a sea of umbrellas.  Everyone waiting for the rain to stop before they trudged up the wet and gleaming pathway.  Carl and I crossed over to the subway station, ready to venture back to our hotel where I could soak in a hot bath while enjoying a beer from the beer vending machine on our floor (yes they exist and they’re amazing).  While waiting for the train I tried to sneak bites of the now wet waffles from my purse because, well, I was completely famished and hadn’t eaten an actual meal in over 8 hours.  As crumbs began to fall I relented, and queued along with a hundred or so soggy Japanese people as the evening humidity started to come back.  In my mind I ran through the beer choices that awaited me.  Asahi super dry I decided.  500mls too.  The big one.  And then the train came. 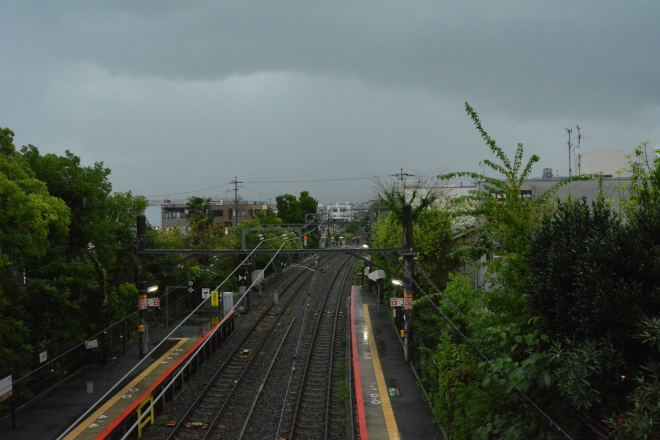