How To Be a Tourist in Your Own City

Traveling, even the tiniest bit, causes your body to crave it.  Once you return from abroad or just a weekend away, the day-to-day seems duller, more pale.  Everything’s accrued a thin film of dust while you were gone.  Everything is just as you left it.  From your travels you feel refreshed and new eyed, but your neighbors are still blasting the same Katy Perry songs and the bar across the street hasn’t even changed their taps yet.

After a few days back home this feeling tends to burn away though.  Regular weekly hours are no longer a buzzkill and the Indian restaurant nearby tastes just as good as you remember.

How then, do you find the happy medium of indulging in your surroundings and treating your city or hometown as its own experience to savor, not a place to escape?

At this point I should probably mention that I live in Seattle, which is one of the most beautiful and outdoorsy cities I’ve encountered — chock full of so many bars, breweries, hikes, museums, and misc. activities you’d think it would be impossible to feel uninspired, let alone bored.  However, boredom can seep into anyone’s days, regardless of where they live.

As Proust says, “The real voyage of discovery consists not in seeking new landscapes, but in having new eyes”.  So go on a voyage without ever stepping outside your city limits.  All you have to do is get off the couch.  Here’s a few ideas to give you some new peepers:

That museum/garden/park you’ve been meaning to go to but haven’t “gotten around to yet”?  Just go.  I mean, truly, there’s no excuse.

I lived in Philadelphia for seven years.  Seven.  Four while in school and three afterwards.  Only after leaving do I realize how little I really saw.  It took me years to even visit certain neighborhoods.  I would just hang in my cozy and known city nooks, always thinking there’d be time to go elsewhere – no rush.  I had already gone to the Philadelphia Museum of Art and to the Natural History Museum; surely I’d visit the Mütter, the Barnes, the Rodin before leaving.  Nope.  There was so much I missed just because I wasn’t in the mood on a particular day.  And now when I visit I’m too busy catching up with friends to see the things I never got around to.

So if you don’t have any firm Saturday plans and are thinking Netflix is calling for a binge of Season Three of Whatever, I’d highly recommend putting on some pants and going to that park you’ve seen pretty pictures of, or hitting up that museum before the exhibition changes.  Cause if you plan to catch the Lichtenstein exhibit “later” then there’s already an 80% chance you won’t.

Take a camera out with you, even if you’re not going anywhere particularly special.

Occasionally Carl or I will throw a camera in our bag before leaving for the night.  Some of the time we never reach for it — sometimes though, we take photos of things we pass every day without taking the time to enjoy them.  Or we’ll just take a brief pic at our favorite local bar.  Don’t be annoying about it and keep your flash on or get in anyone else’s faces of course, but recording the “mundane” transforms it into a fond memory.  This way when you hit up that bar months later there’s just a hint of nostalgia to it.

It’s hard to make your phone really count for this one.  We have our phones with us everyday, and because of this there’s no magic to taking your phone out.  This doesn’t mean you shouldn’t snap away when you can, but a camera (that has no other function than taking pictures, god forbid you bring your iPad with you for picture purposes) will have just the right amount of “different” to it. 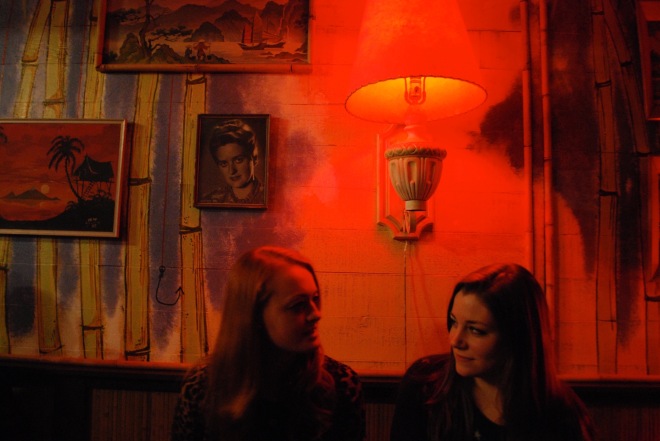 Having a visitor over allows you to experience your city for the first time a second time.  Before our friends and family visit we comb over what’s absolutely necessary to do if you have 2 days in Seattle, or 4 or 6.  This boils down to us creating our very own bucket lists for the city we wake up in every day.  You remember what exactly you love, and the things you miss without ever knowing it.

I didn’t realize just how much I loved Holy Mountain Brewing until I absolutely insisted we take our friend there during his weekend stay.  It’s on the way to Discovery Park after all, an even bigger must.  A visitors coming gives you an explicit reason to go to these places all over again.  Everyone wins.

Make that restaurant reservation already.  Please and thank you.

If I spend my vacations eating new foods then my belly is happy.  And if your belly is experiencing new things then the rest of you is too.  If you’re eating at the same place every week your tongue has grown indifferent to what it’s eating, and nothing makes me feel bored like being food bored.

So if there’s a new Italian joint that’s always too busy to walk into, just make the damn reservation.  And if you’ve never had Korean, or Ethiopian, or Afghani, then do that!  Seek out something new.  Some of my favorite experiences when traveling are the meals I’ve eaten, and how am I to know if that Malaysian place around the corner from me won’t be just as memorable as that ramen in Tokyo?

Not only will this inspire you to do a few more activities, you’ll also come out with a rediscovered sense of pride for your home.  A quick nostalgia rush of all the places you’ve been.  You’ll also become very defensive.

Bad reviews make me angry and protective of my city.  I love bad reviews.  One of my favorite kinds of bad review is the person who comes away from an attraction angered that it has the gall to be exactly what it advertised as.  Seattle’s Fremont neighborhood has a troll statue located under one of its bridges.  It’s called the “Fremont Troll” and was featured in the flick The 10 Things I Hate About You, but Cindy from Michigan states:

Now, this troll never proclaimed to light up or become animated at night, traipsing through local bars, he only ever claimed to be a statue.  This doesn’t stop countless reviews popping up from people who are “unimpressed” with inanimate objects or start a review with “it’s just a ____ “ over something like a lake or a neighborhood park.  Yes, the lake you’re at is just a lake. If what you really wanted was a milkshake then get a milkshake, but don’t take it out on the lake in front of you.

So fuck you Cindy.  I’m gonna head over to the Fremont Troll right now because he’s beautiful.  And that also gives me the excuse to stop at a few breweries in the area, maybe grab a sandwich from nearby Paseo’s, then post a 5-star review on TripAdvisor.

Out of spite, and out of love for my city — which I just now happened to fall in love with all over again.

The Highly Rated Post Alley Bubblegum Wall – Since been Destroyed