The Grit of Lisbon

Twenty minutes ago we plopped our bags down in the hotel and already we’re witnessing a full-on brawl.  Our quest for a bifana (a pork sandwich that’s basically Portugal’s equivalent to the cheeseburger) landed us late on Saturday night into a local dive restaurant serving bifanas, fries and frosty mugs of beer — the later of which crashes into the wall behind me three minutes after I eat my first fry.

Within seconds the neighboring table is flipped upside-down, more mugs go flying, and it’s staff vs. a table of drunk and surly patrons.  Were we in the outskirts of town?  The diviest of dives? No, it was a sandwich shop downtown.

When you’re in a city for less than 48 hours it feels like a lie to say you “get a feel” for the place, but in Lisbon, I get you bro.  It’s gritty. It’s graffitied. And it makes no apologies.

We pride ourselves that when we go somewhere we go hard.  There’s very little lounging.  We eat well, drink well, museum it up, trek across neighborhoods, visit the oldest churches and the newest breweries, only to pop back to the hotel for a quick shower before dinner. 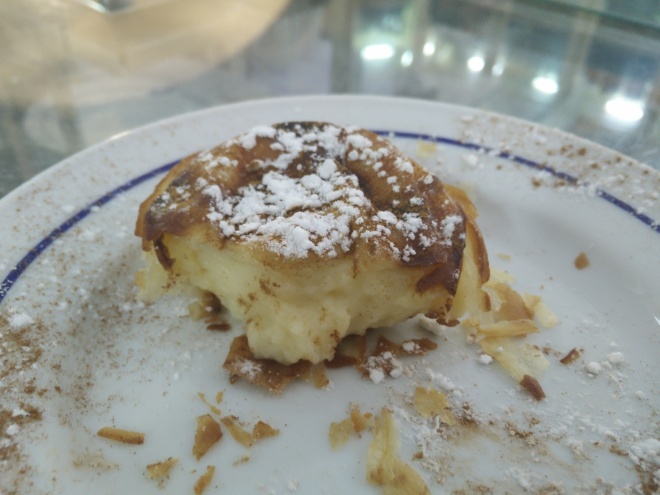 In Lisbon we carried on the same tradition of being out, be we were never really anywhere in particular.  Mostly we ate as many pasteis de nata (a local egg pastry) as our stomachs could handle, hitting up five different nata locations in less than 20 waking hours, and wandering up and down more narrowing streets searching for the best views.

The most “up” we got was the churchyard of Mirador Señora Do Monte, providing a stunning panoramic view of the terracotta roof tops that paint the city.  Everyone loves a good view, but don’t gyp yourself out of the walk by taking a taxi or an uber.  Each alley is a canvas, colored in the best looking graffiti I’ve seen. Intrinsic and inherent to the scene, like the works grew from the ground, reaching out like a weed.  Brought upon by a wish from the streets themselves, a call for their white walls to have meaning. 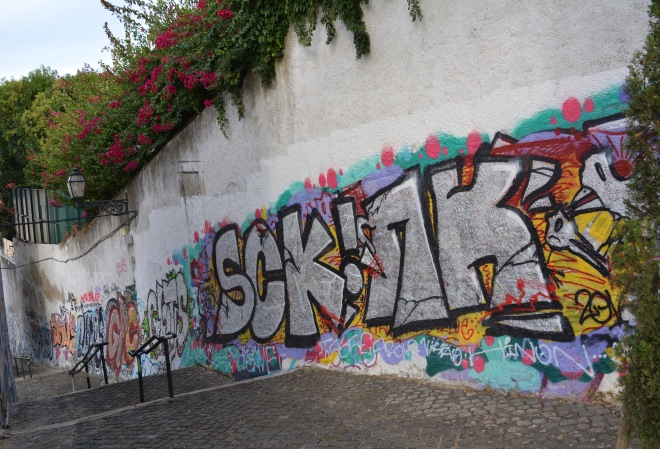 Trolleys chug by during our descent.  Decades old, grunting and huffing, they remind me of a grandpa bucking it up a hill with socks pulled to the shins and a hand to the back.  They look and sound old, but they’re beloved.  If when imagining Lisbon you don’t see trollies and terracotta roofs then you’re envisioning a different city.

Down we go, stopping at a walk-up window for some Ginja (a cherry infused liqueur), stopping to get our third pasteis of the day, dinner and second glass of wine, before cozying up in bed to watch some Portuguese reality tv.  As I’m falling asleep, capping off the end of our 10-day voyage through Spain’s Eastern and Andalusian regions, with a quick nightcap in Portugal, I decide that Spanish reality tv is indeed better than the Portuguese equivalent.

Back we go.  Back to places I’m familiar and comfortable with.  Where the walls aren’t sprayed purple with paint or brown with beer.  Where things are quantifiable and predictable and I know what’s ahead.  And while this feels oh-so-good that doesn’t mean I don’t miss bloodied up bifanas all the time.