In the last census Jay Em Wyoming’s population went down as a whopping sixteen.  118 miles Northeast of Cheyenne, in a region where cows outnumber people and the roadside is lined with tumbleweeds, you wouldn’t expect to pass thousands of cars on a Monday morning.  August 21st 2017 though, total eclipse day of the sun day, and it’s Mad Max rules.

Trailers and trucks are parked just inches off the shoulder of 85, tripods are set up and ready for action, and folks are planted in their foldable armchairs, sipping out of thermoses. Waiting.  Just shy of a quarter till noon the sun will be eclipsed by the moon, creating total darkness in Jay Em for over two minutes.

It would be a lie to say our West to East coast road trip itinerary wasn’t planned around this event.  We dawdled in Northern Colorado for a few days to ensure we’d be within reach of the blackout, derping through Denver, Breckenridge and Rocky Mountain National Park, all the while never truly sure where we’d catch the big show.

Alliance Nebraska seemed a viable option, and I had my eye on Carhenge in particular.  A replica of Stonehenge, but with automobiles, I figured it would be the perfect place to watch something as surreal as a disappearing sun.  The thing about plans though, is the weather don’t give a shit about your plans and the forecast for Alliance in the days leading up to the 21st was clouds. (moment of silence for all those who flew into places like Charleston only to be met with rain).

The evening of, overnighting in Greeley Colorado, we scratched our dreams of strategically placed cars glowing in twilight and input Jay Em into our maps.  I remain unconvinced the sixteen counted in the town’s last census aren’t ghosts, and an “almost” ghost town in Wyoming seemed an appropriate venue.  We expected a couple neighbors in Jay Em, but figured most would flock to Cheyenne or Casper.

Turns out, paths of eclipses are all encompassing in appeal. Any city, town or field close to that blackout line was filled with cars.  Every parking lot was chock full of visitors, ranch driveways had signs advertising parking for $50.00 or eclipse glasses for $20.00, and gas station bathroom lines were atrocious. 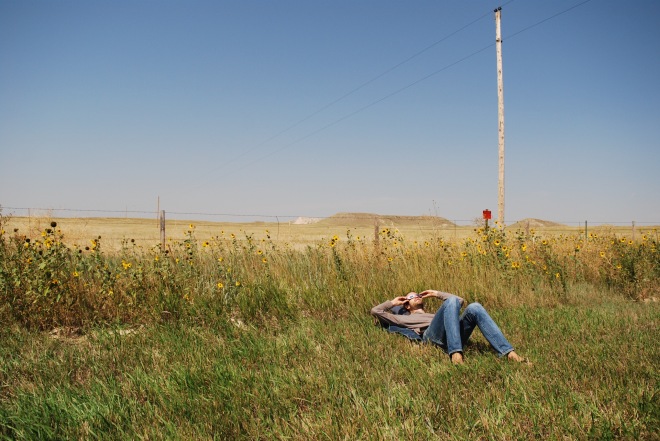 Jay Em consists of an abandoned garage and general store and one viable post office, but driving in that morning there were hundreds parked in the old town center.  Signs stated there was a parking fee to enter town, so we passed right on by and pulled out into a ditch along the road.  Glamorous certainly, but there were dozens of vehicles nearby, and we struck up some conversations with our fellow ditch-mates. Two middle aged men traveled from Germany to be here and exchanged some deutch words with Carl, and two twenty something boys traveled from Denver, one on the way East to work for NASA.

All throughout the wait from the corner of my eye I’d make out individuals sneaking into the fields in an attempt to pee clandestinely, with only cows as witnesses. 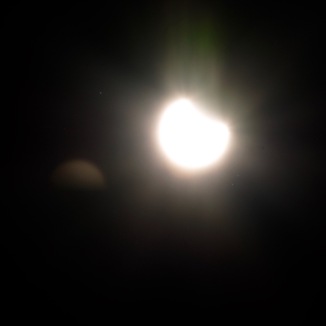 At 9:00am when we pulled over the sun was still 70% visible, and if I hadn’t known an eclipse was in effect I wouldn’t have suspected anything was amiss. Even at 90% I wouldn’t have thought “oh my god the sun is burning out”.  If I were driving around I likely would have thought  “hmmm, looks like rain”, then turned the Beach Boys up to fill the Wyoming emptiness with Barbara Ann. 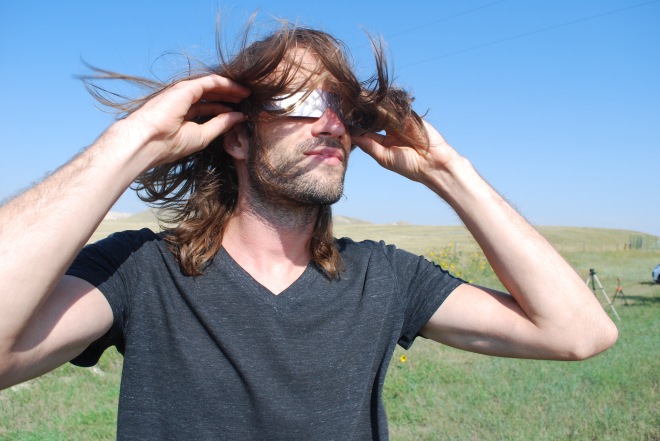 However, with cars frantically speeding by and making last minute 90 degree turns off the highway something was clearly up.  My first guess would more likely have been “Mars Attacks style alien invasion” than solar eclipse, but that’s just because I’m constantly looking for life to imitate Tim Burton.

Crickets came out at 99%. It looked like dusk, except dusk doesn’t happen evenly in every direction.  At dusk, towards the west you see the glow of the setting sun, and in the east, twilight.  Now th, the horizon look the same whichever direction you turn.  An even glow all around.

100% felt like I was among a coven of witches.  There was shouting and applause as the sun turned into a black and burning hole in the sky; a sun shaped hole in the universe.  Rays of light flared behind the moon, looking like flames licking lunar craters.  I teared up a bit.  I’ll admit, the eclipse bug hadn’t hit me as it did Carl.  Out of our entire month-long road trip the eclipse was what he was anticipating the most.  I was excited, but I wouldn’t batch myself in with those who bought plane tickets years in advance, or those who were using up the rest of their vacation days explicitly to eclipse out.

When the moment finally came, when the sun was swallowed by the moon, I was converted. 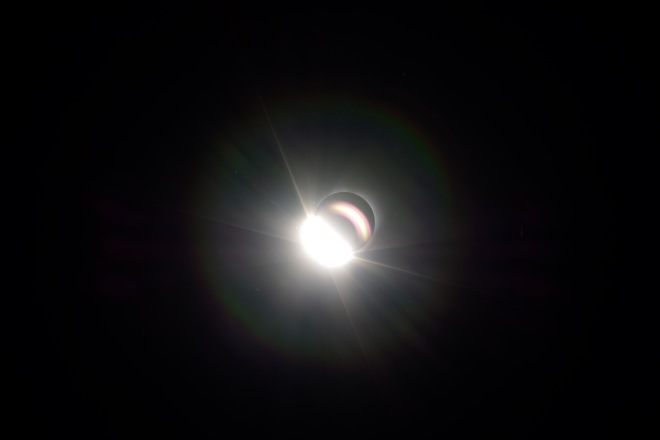 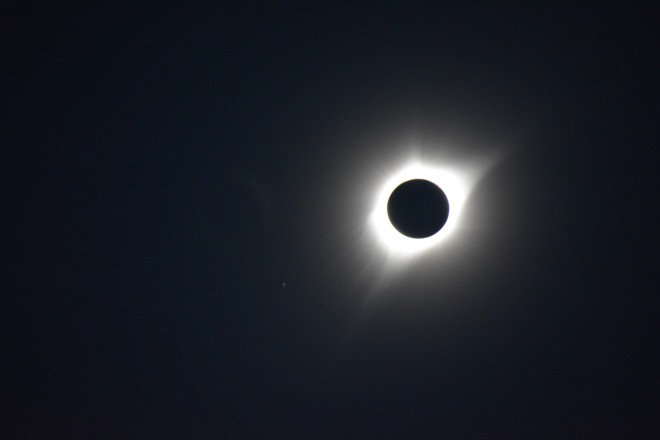 The surrealness of the moment cannot be underestimated.  I wanted to turn towards Carl and ask “are you seeing this?” because though I was in a crowd, the moment felt so out of place it was hard to imagine this was something others could be in on.  For a second I thought, “oh my god, no one is going to believe this” — Kind of like how you’d feel if you caught Bigfoot in action, or if you opened a bag of m&m’s and they were all blue.

And just as the hoots and hollers started to subside, just as the tears were on the brink of falling, the sun peeked out and it was 99% again.

But before we get in our car and drive away, away only to land in bumper-to-bumper traffic in Lusk, Wyoming (the town’s 2 traffic lights were no match for the eclipse crowds, so the sweaty and panicked town sheriffs were directing cars one at a time across main street), before we pass into South Dakota and into prairie dog heaven, let’s not forget the most important question about witnessing the eclipse by a ranch, and that is: Do cows notice anything is different?

We weren’t sure if come the blackout cows would stampede through the highway running amok, if they’d bunch together mooing forlornly or head towards the hills looking for the sun behind the distant bluffs.  What would the cows do? The answer is…nothing. They do nothing. Some sat during the eclipse, but not enough to register anything except “Look! There’s some cows, sitting”.  They didn’t group together. They just stayed where they were.
Before the blackout we did notice an elk in the distance, standing still surveying the scene from afar, and we thought “That elk, he gets it”