Jack’s Travel Plaza advertised “big burg rs” and “espres o” in skewed letters, next to a sign hocking packs of Montclair cigarettes for $3.20. In the distance stood a hillside painted in numbers, a pattern John Nash himself couldn’t break: 63, 29, 50, 48, 06, 86… My initial guess was I was counting the numbers of local graduating classes, but that wouldn’t explain how the 34 was still as vivid as 08. We were in Arco, Idaho, 450 miles away from where we had woken up that morning. 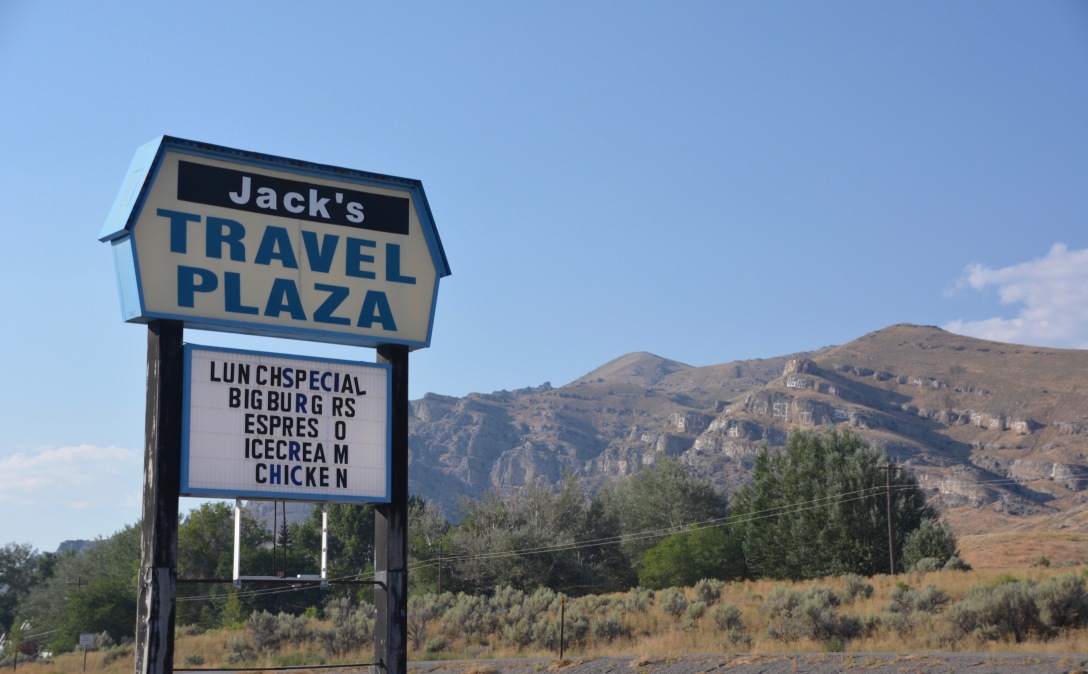 The drive into Idaho was on one of those highways that road trip dreams are made of.  Seldom did we meet another car, and the pavement ahead of us was flat enough to see for miles, where hillsides turned blue in the summer haze. 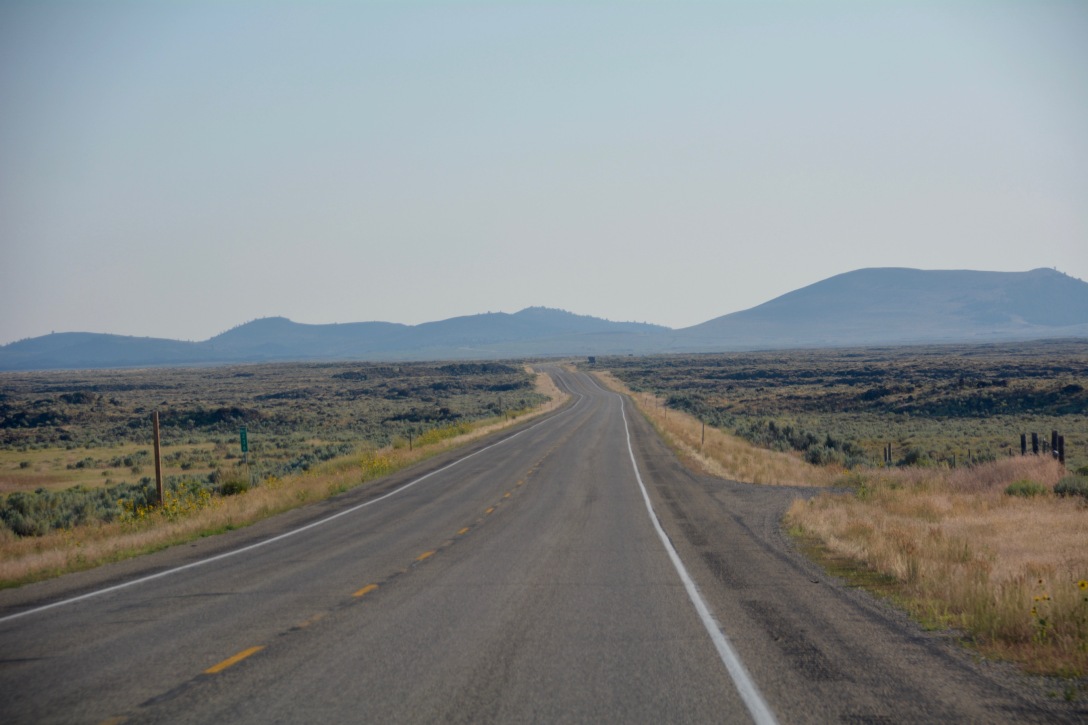 Arco was not our final destination that evening; we were passing through that 995 person town on the way to Craters of the Moon National Monument.  I found out about Craters from a random listicle of “the best place to visit in each state!”, and I was highly anticipating this stop because after stumbling upon the name, I did not do any further research into it.  I saw a single image: a gravely hill with a lone voyager on it, thought to myself, “done”, then added it onto our list of stops, nestled between Glacier National Park and Salt Lake City.

I was half expecting it to be a bust.  I rarely travel to a place without having a firm idea in my head of what I should expect to see.  Heck, I’ve done so much research on certain places that I can piece together every angle of an attraction purely from memory of Google image searches.

Lucky for me, Craters of the Moon is aptly named, so all the visions I conjured up in my mind turned out to be pretty accurate.  Places like “The Grand Canyon” prove true to their name.  It is, after all, a large canyon.  But “Craters of the Moon”, now that’s a sexy name.  The visitor imagines they’ll find a terrain unlike any other they’ve walked upon. One that’s alien, barren and lonesome.  In reality, it’s all of those things, and because I had no expectations, my expectations were not let down.  I was able to see the place as it was.  I was able to experience it on my own. I was able to walk on the moon. 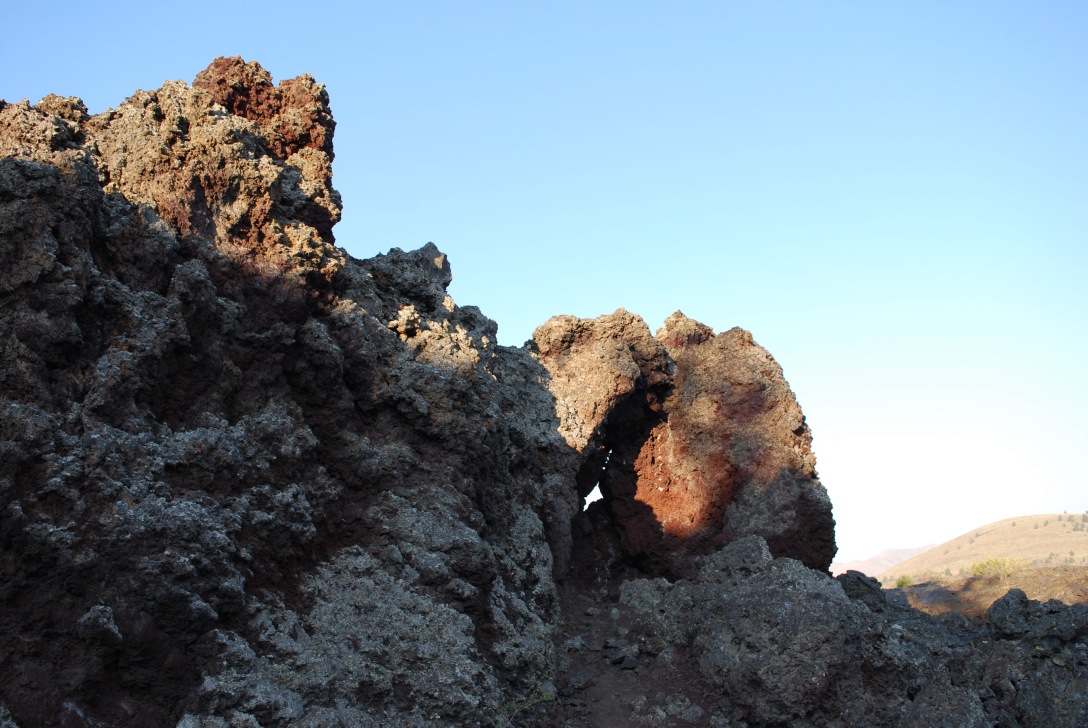 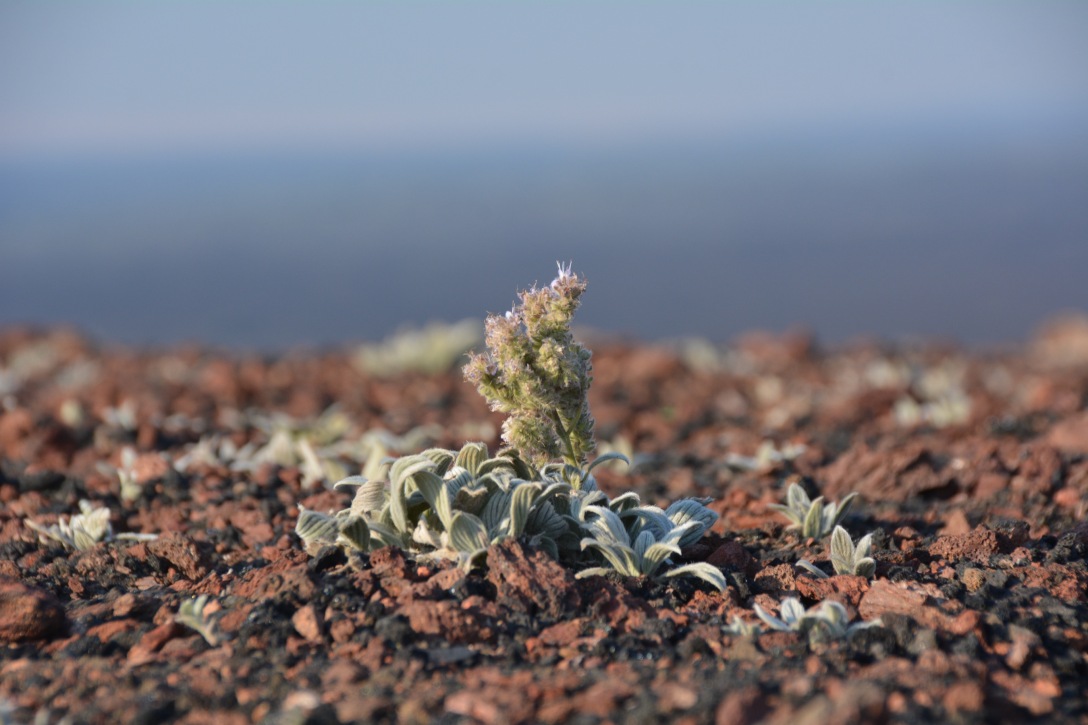 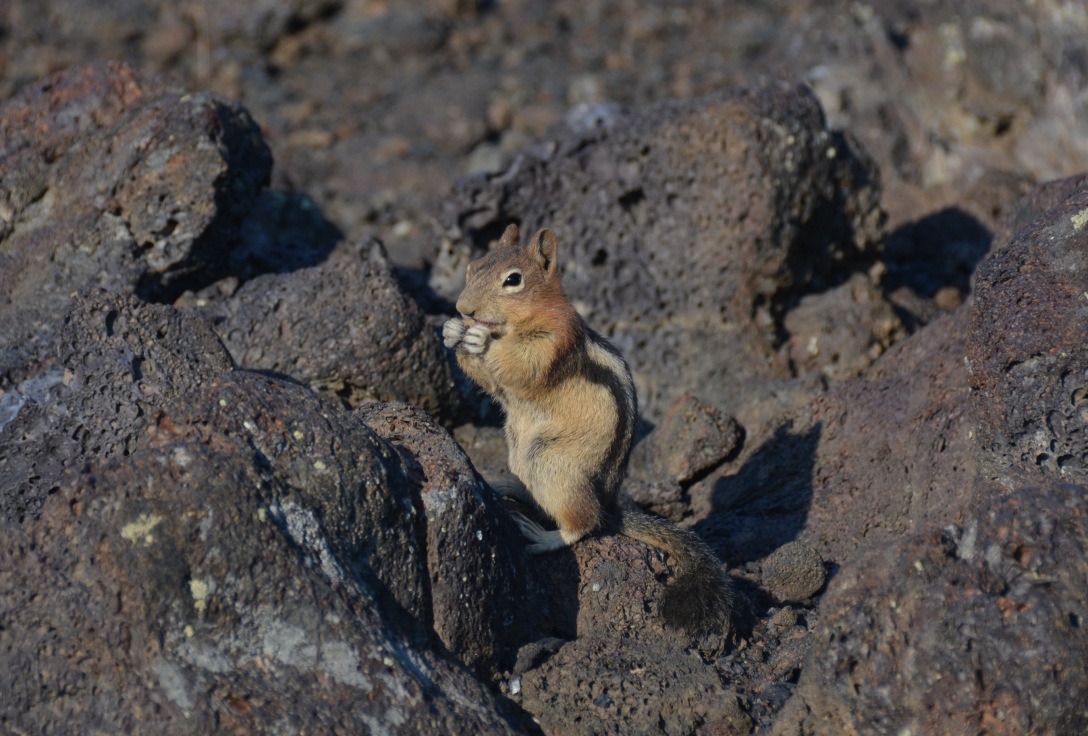 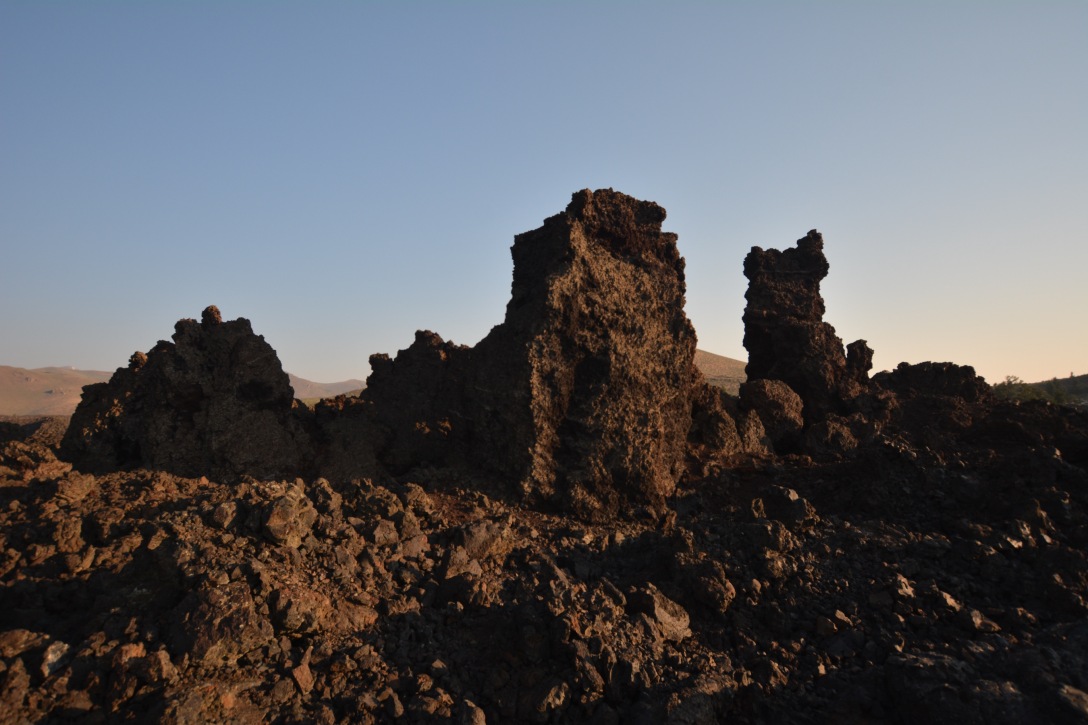 The landscape is volcanic rock, which ranges in size from itty bits of gravel to man-sized monoliths.  The area was birthed through lava flows that formed between 15,000 to 2,000 years ago, and has expanded over an area of 600 square miles.

We snatched one of the last two camp spots in the park that night, and dined on a dinner of mac-n-cheese and hot dogs, paired with a side of Heinz chili sauce.  This meal felt absolutely decadent after a day in the car, and to up the luxury factor, we split an Instant Karma IPA from Fremont Brewing in Seattle (moving East from Seattle we packed what I’d describe as a “military cooler” full of beer from local Washington breweries, replacing the cooler with fresh ice on a schedule rivaling that of feeding a newborn).

Summer is an ideal time for camping at Craters of the Moon, but there is a caveat. The lava rocks that cover the campsite are almost unbearably hot to the touch, so the earth burned below our sleeping bags as we tucked in for the evening. It took some time to get acclimated to the heat before we could fall to sleep.  A sleep that did not last for long, as hours later Carl rustled my shoulder, motioning me outside of the tent, pointing upwards.  Above me the milky way blazed in all its glory, more defined than I’d ever seen it, causing the sky to glow. 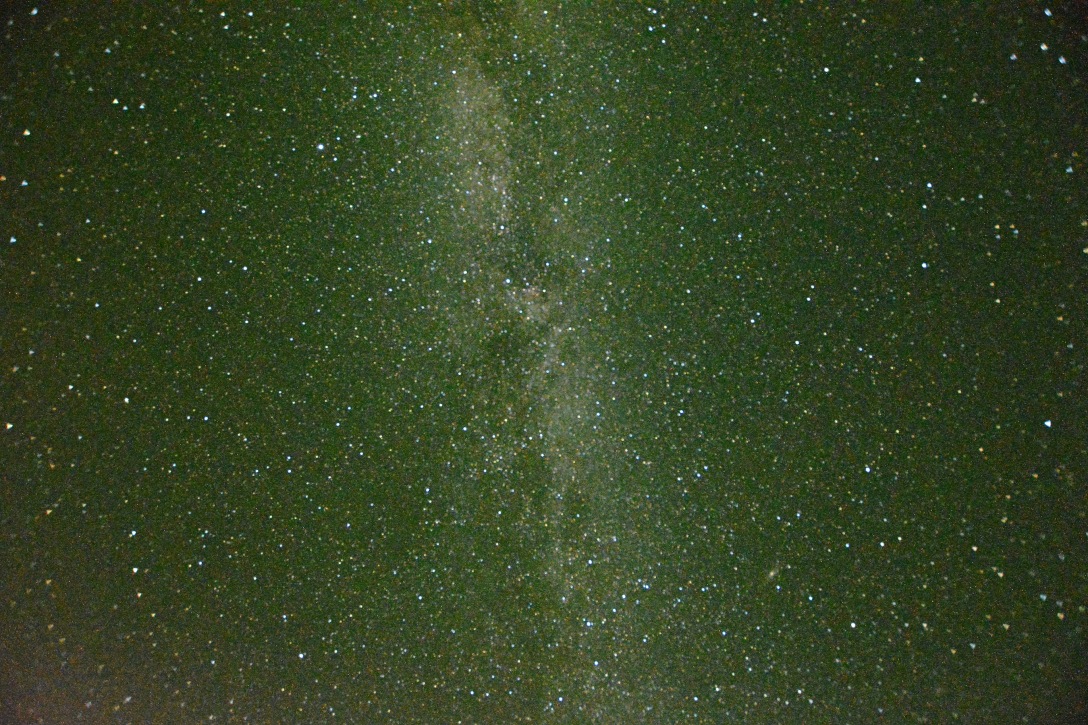 In the morning we made a dawn trek through the lava.  Craters of the Moon’s 7 mile driving loop provides spectacular roadside views as well as access to a half a dozen quick hikes for park goers to embark on.  The North Crater Flow trail is a short and sweet ¼ mile hike through the destruction of a lava field and The Devil’s Orchard showcases knotted ancient trees that managed to take root through lava, but the Inferno Cone, simplistic as can be, steals the show. 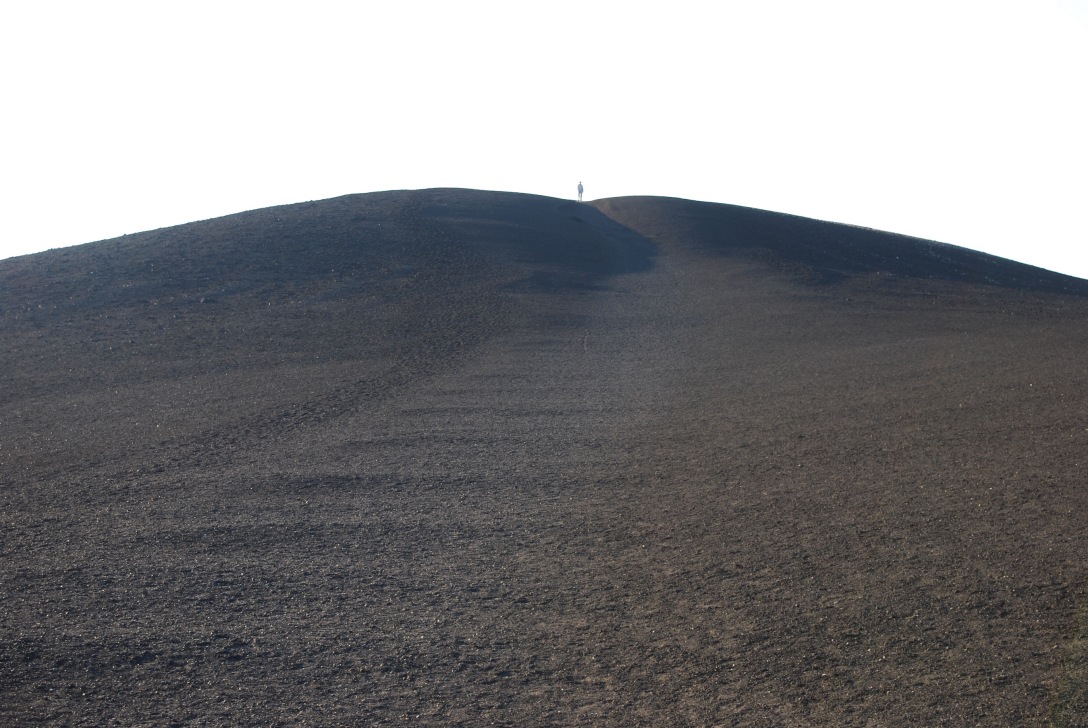 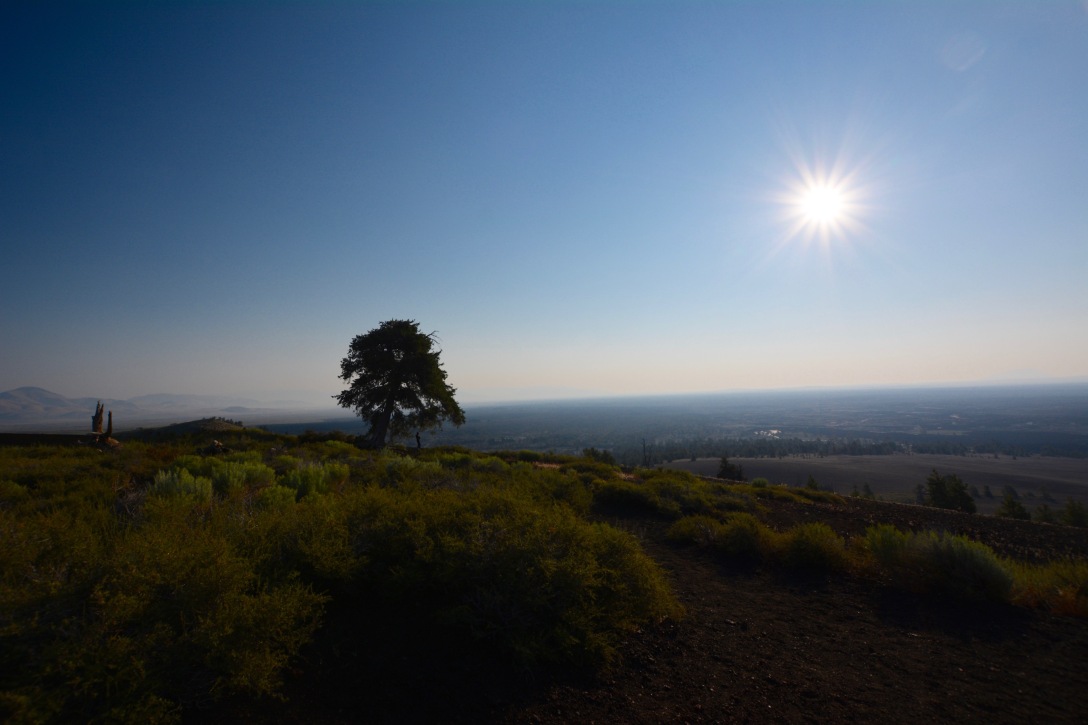 The aptly named Inferno Cone is a cinder cone formed by pulverized lava.  The trail is a path drawn into the cinders by thousands of feet and the hike is straightforward.  Go up.  We thought we’d be the first ones out for the day on the trails, and at the Inferno cone we were proven wrong.  Upon our arrival at the trail we made out the figure of a man looking down upon us from the peak.  At first this image was slightly alarming.  The morning light had a slimming effect on the figure, turning his legs into thin rails, and morphing his head into that generic deflated football alien shape.  As he made his way down the hillside, it became apparent he was wearing a khaki suit and a straw boater hat, which felt like stumbling upon David Byrne or a Wes Anderson character in a national landmark.  If this guy can pull off a leisure suit at 6:00am I really need to up my game.  Compared to him, none of us have an excuse for wearing sweatpants. 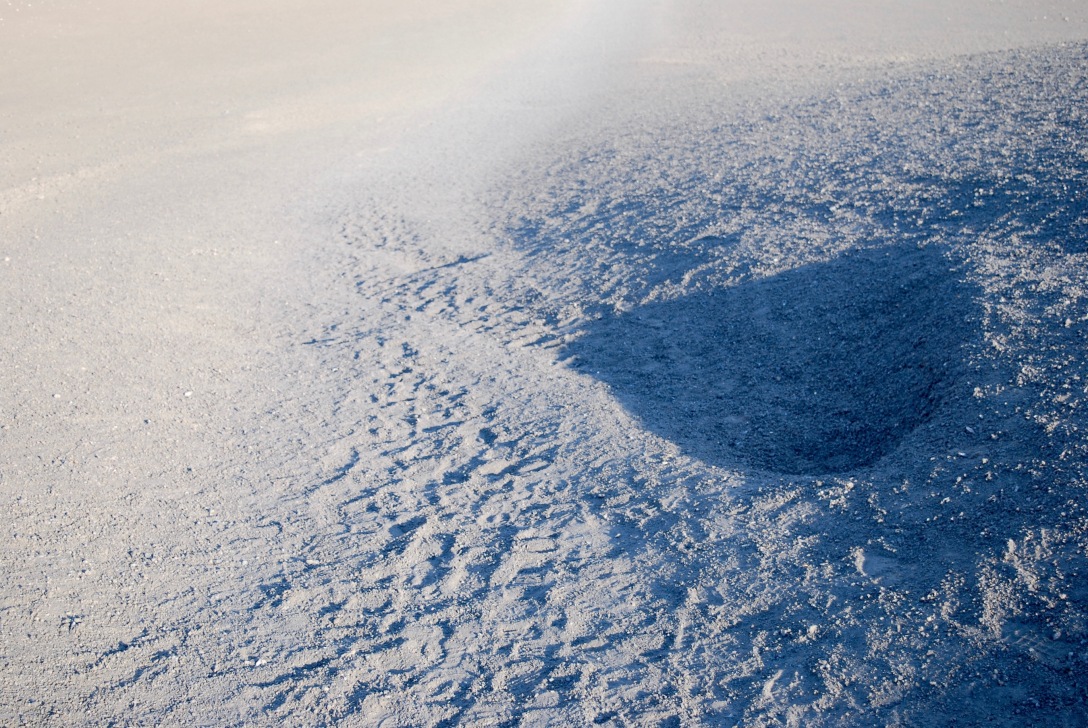 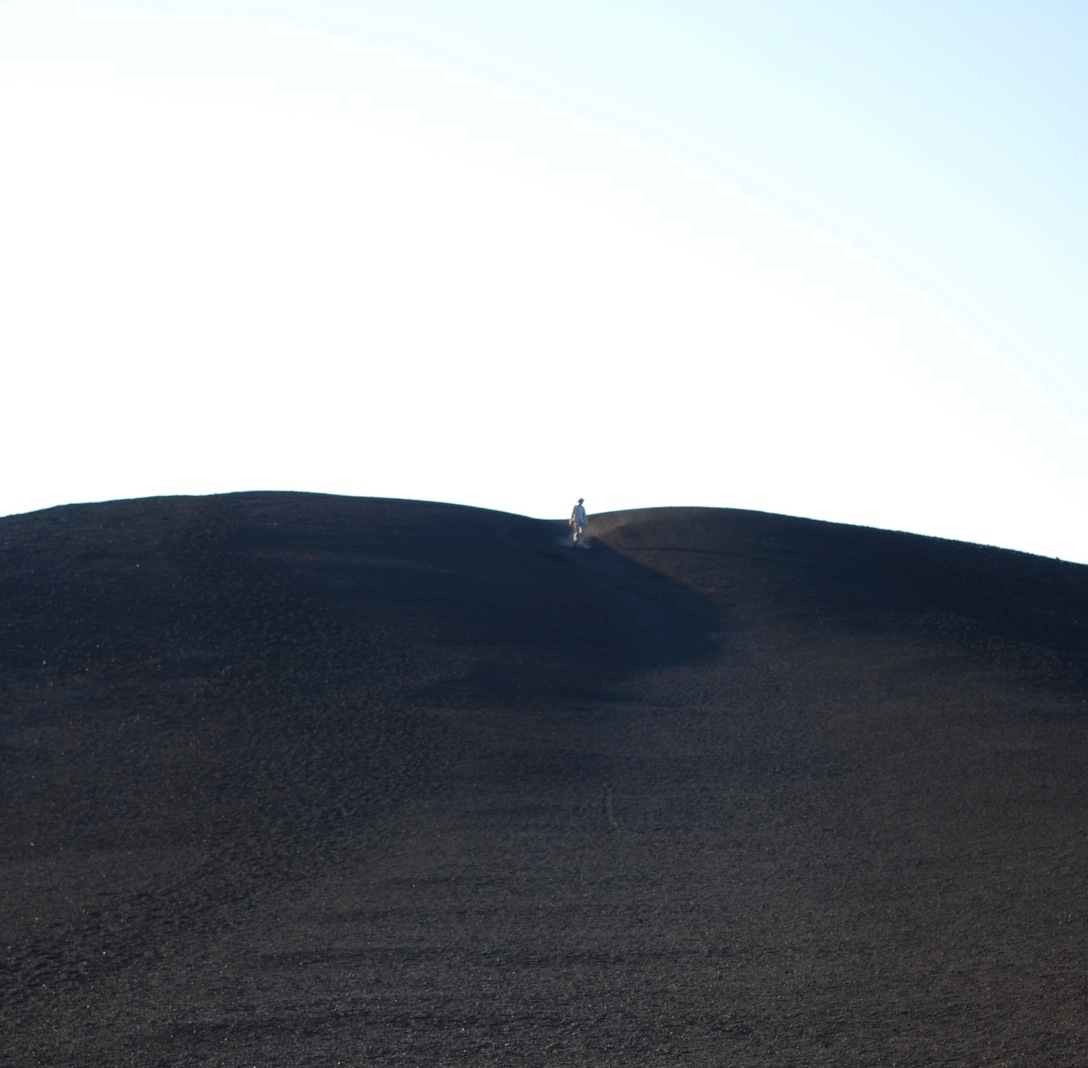 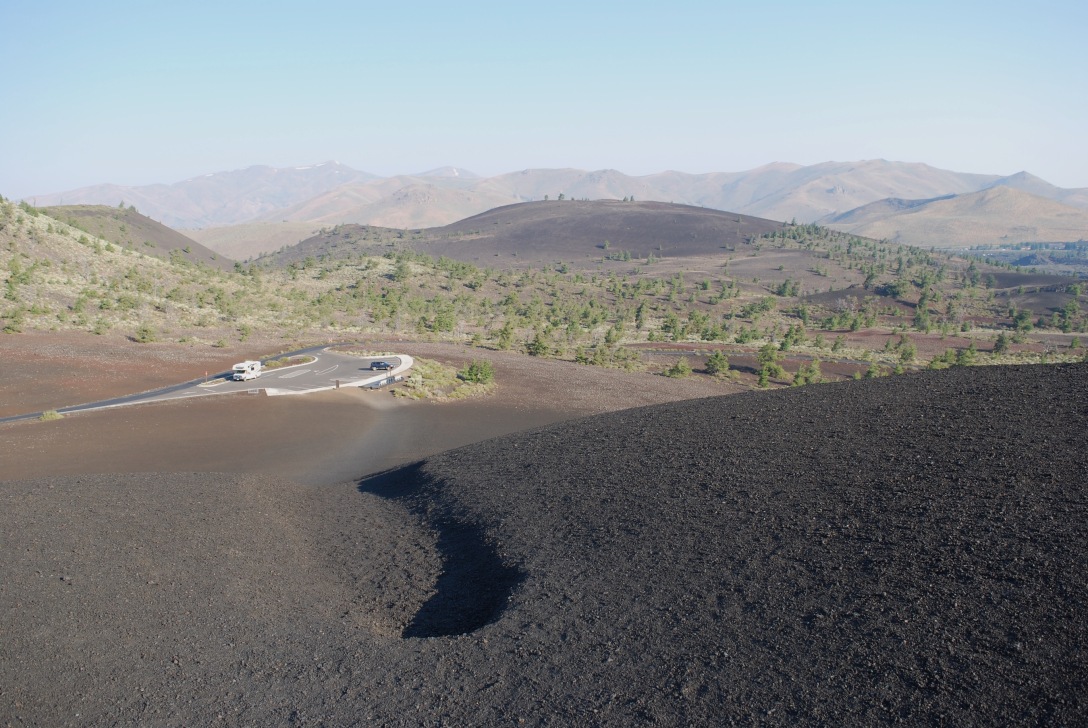 For those that get lost in the little things, Craters of the Moon is a delight.  I can spend hours looking at the patterns of moss on a tree or algae on a rock. What lava can do is mesmerizing. On the ½ mile Spatter Cones trail you can get up close with some baby volcanoes.  25 feet tall with the craters intact,  you can see the liquidity of the molten in some spots, with surfaces smooth as glass, while in other areas the rock is coarse and jagged.  Cutting yourself on the terrain is not out of the question, so touch with caution.  This was a stark contrast to the lava rocks at the Inferno Cone, which were light as can be.  We were able to rest on the ground to take photographs, and when getting up the lava would stick to your clothes like foam peanuts. 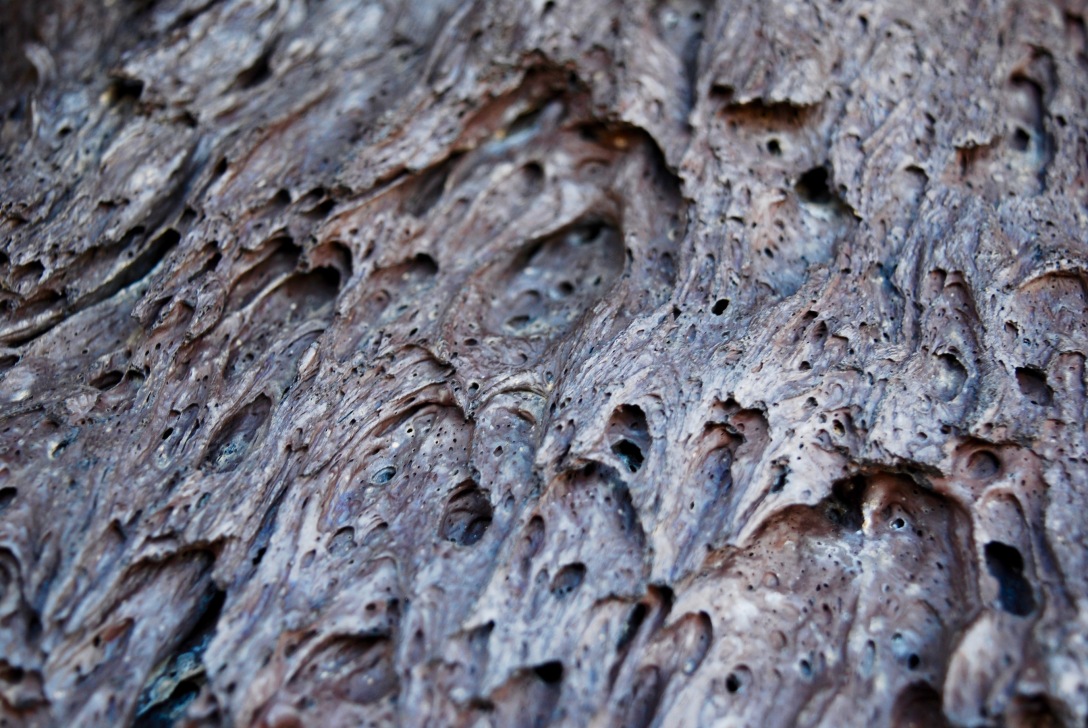 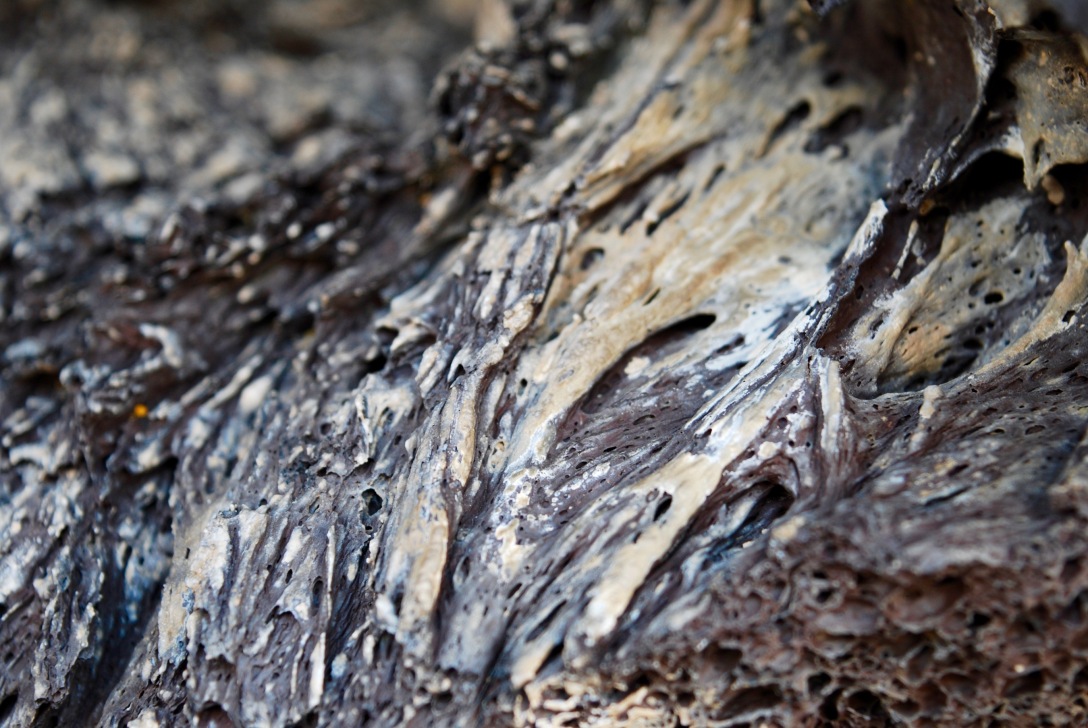 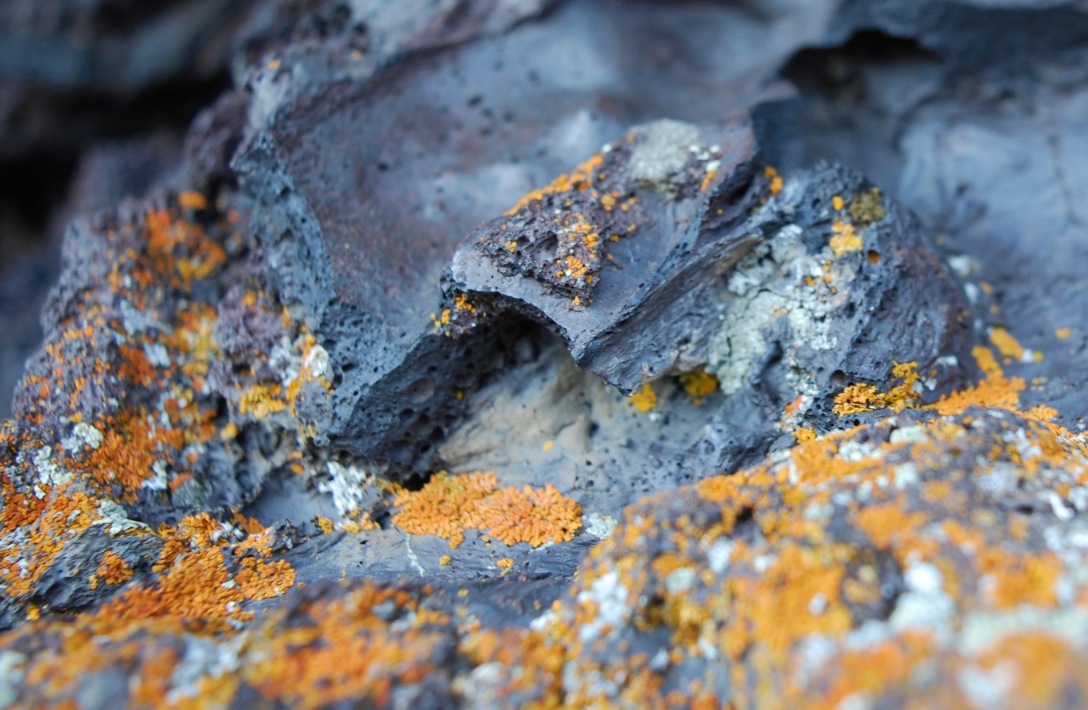 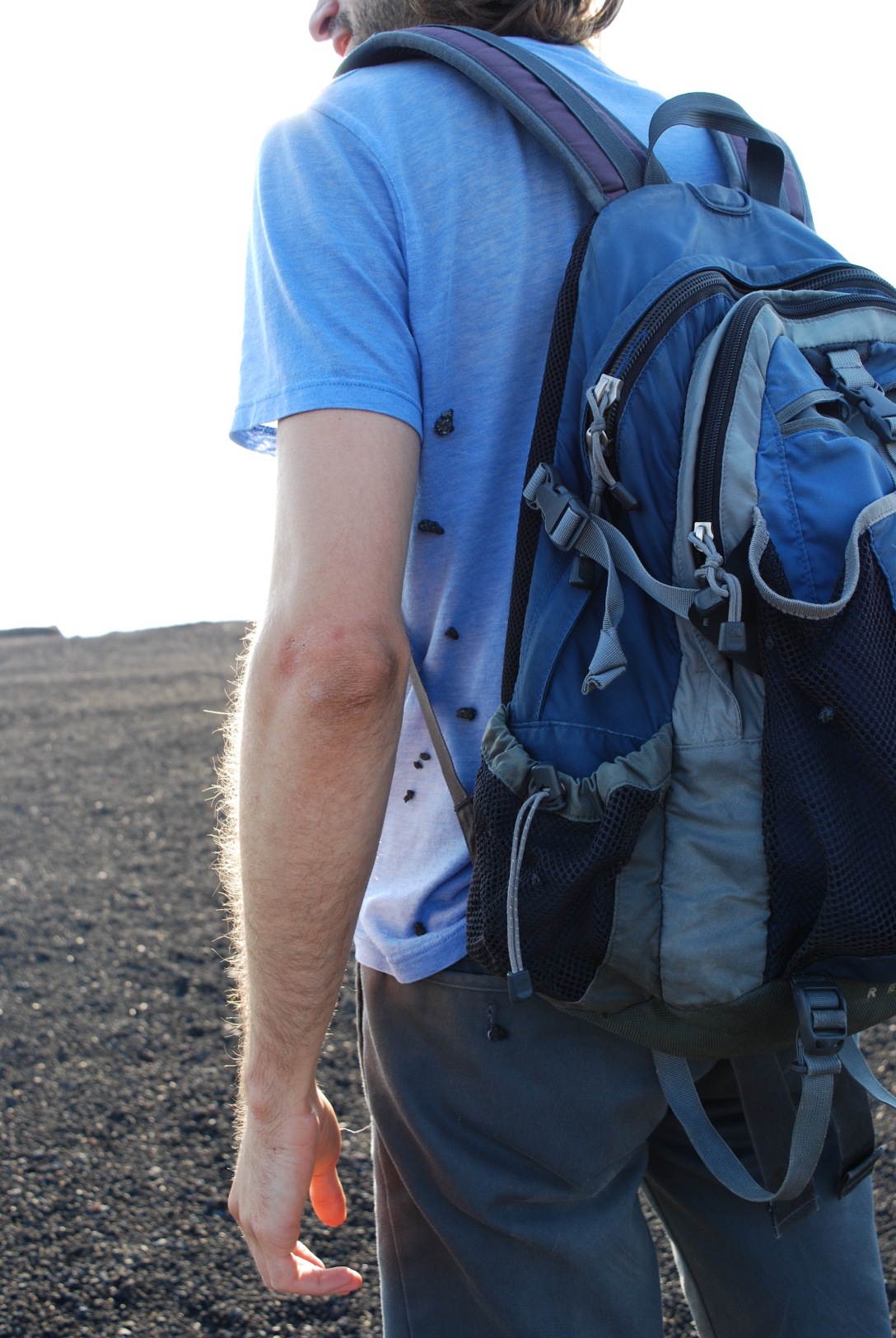 Craters of the Moon has attracted not just tourists, but astronauts as well.  In 1969, four Apollo 14 astronauts were brought to the area in preparation for future travels to — you guessed it — the moon.  What more is needed to prove a place is unique and of its own category than if it gets the astronaut seal of approval?

Every time we could make out a silhouette in the distance it looked like an album cover.  Man seems so out of place against the landscape, which is what makes Craters of the Moon feel truly wild. You won’t find any hot dog stands here!  Only twisted earth, burning rock and the vegetation able to coexist with the environment.

Idaho seems to me to be one of those more “forgotten” states.  There are no major cities, oceans or National Parks to draw crowds.  However, this does not mean Idaho is lacking beauty.  The mirror-like Alpine lakes could be mistaken for a scene out of Washington; the Rocky Mountains here provide you that same woodsy goodness as the more popular hiking destination Colorado; and in Autumn the shades of the state rival the colors of New England.  In short, it has all of the appeal of other states, and gets none of the glory. This makes it a wonderful place for road tripping.  There are no crowds to push through and no traffic.  It’s your own private Idaho. 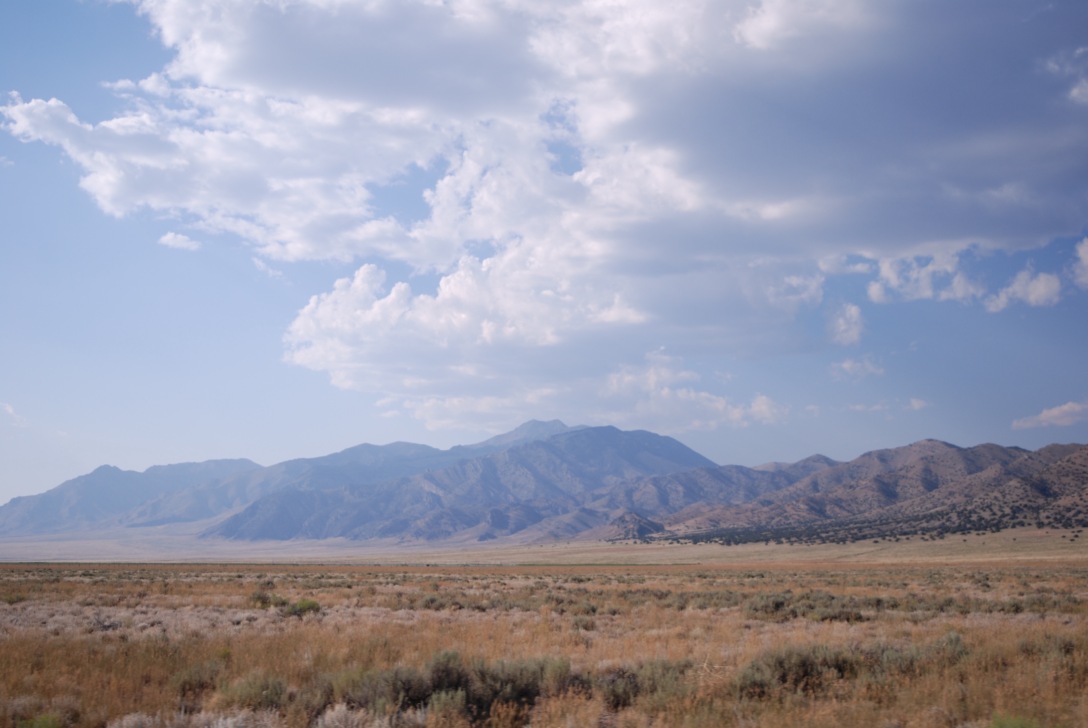 On our way to Salt Lake City we wrestled with a decision.  Do we drive 2 ½ hours out of the way to make a pit stop in Ketchum?  In Idaho there’s not a lot of roadside attractions that warrant going 20 minutes out of the way, but ultimately we had to make a stop to say hi to none other than Ernest Hemingway.  There’s many spots in the world that claim to be the “home base” of the writer.  The Florida Keys, Madrid and Paris love to call themselves Hemingway’s home, but Ketchum is the place where he rests, the place he went home to for always.

He rests under a tree, with an unassuming gravestone.  Flat on the ground, there’s no monument that marks his spot, no masoluemn to denote his importance, you’d miss him if you weren’t looking for him.  It took us a few minutes to locate him, but once we spotted the name “Ernest” on the ground, we sat down and took out a bottle of whiskey with two cups.  One for us, one for him.  A cigarette was rolled then lit, Carl exchanged some words, took a few sips, then went for a walk through the cemetery.  I was left alone with the man whom I’ve read and reread time again.  I won’t tell you what all I said sitting there that day, but I did remind him to turn the stars out at night, as he told me once in “True at First Light”.  Then I poured out a sip for Ernest, blinked away what some would take for a tear, then walked back to the car. 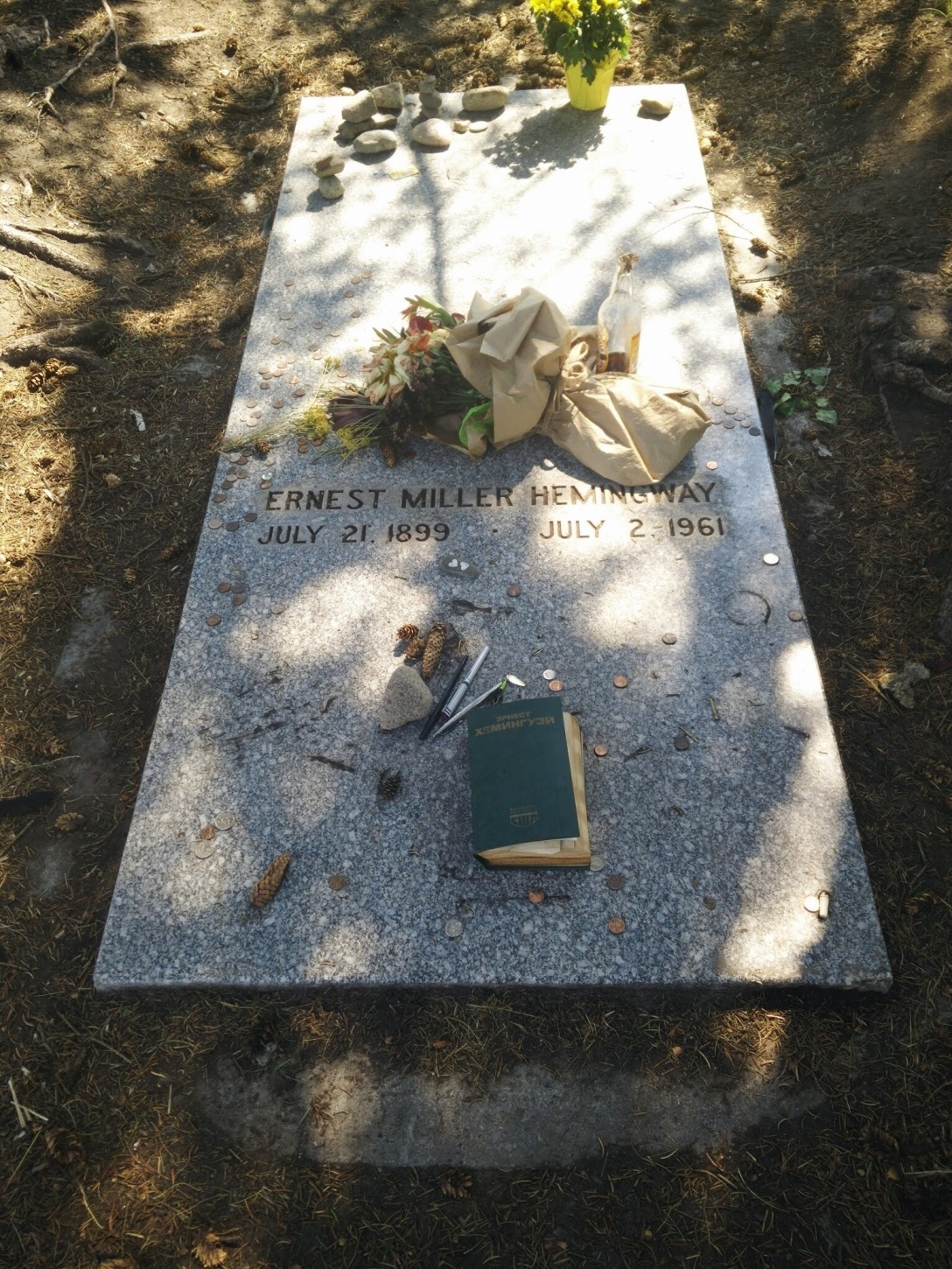 We drove south into the town of Twin Falls with the goal of checking out the waterfalls the town is eponymously named after.  Initially the town was like any other in the United States; it was surrounded with an armor layer of strip malls, Panera Breads and Wal-Marts comprising its borders.  Shortly after we penetrated this commercial shell though, things got a bit more weird.  From my passengers side seat I spotted three pet bison located in a backyard in town and ornate mormon temples in otherwise empty farmlands, before snaking down along the river to the falls view point. 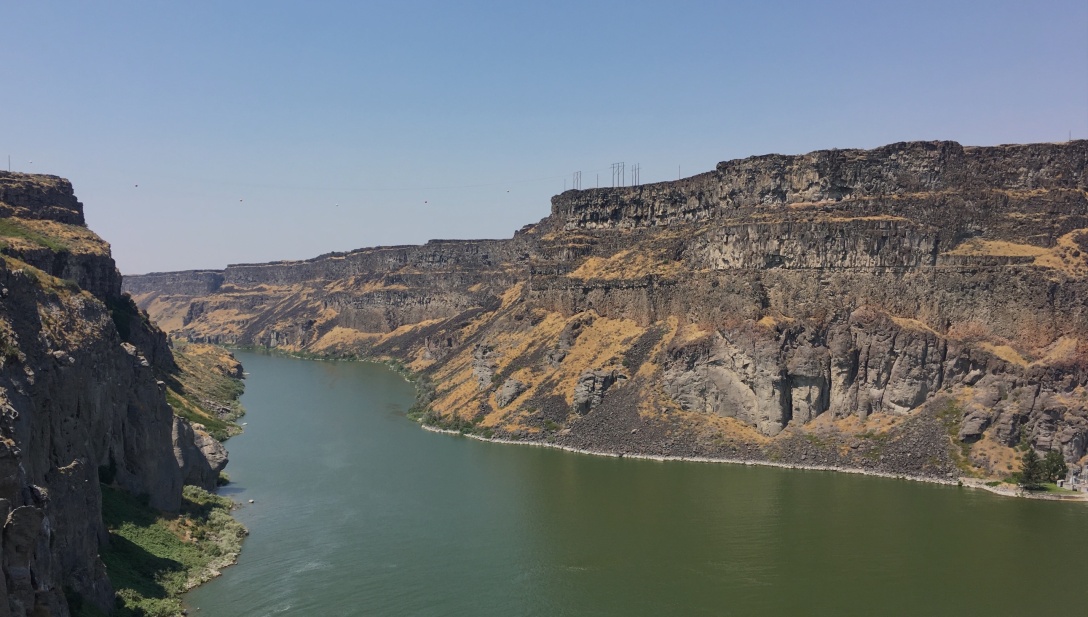 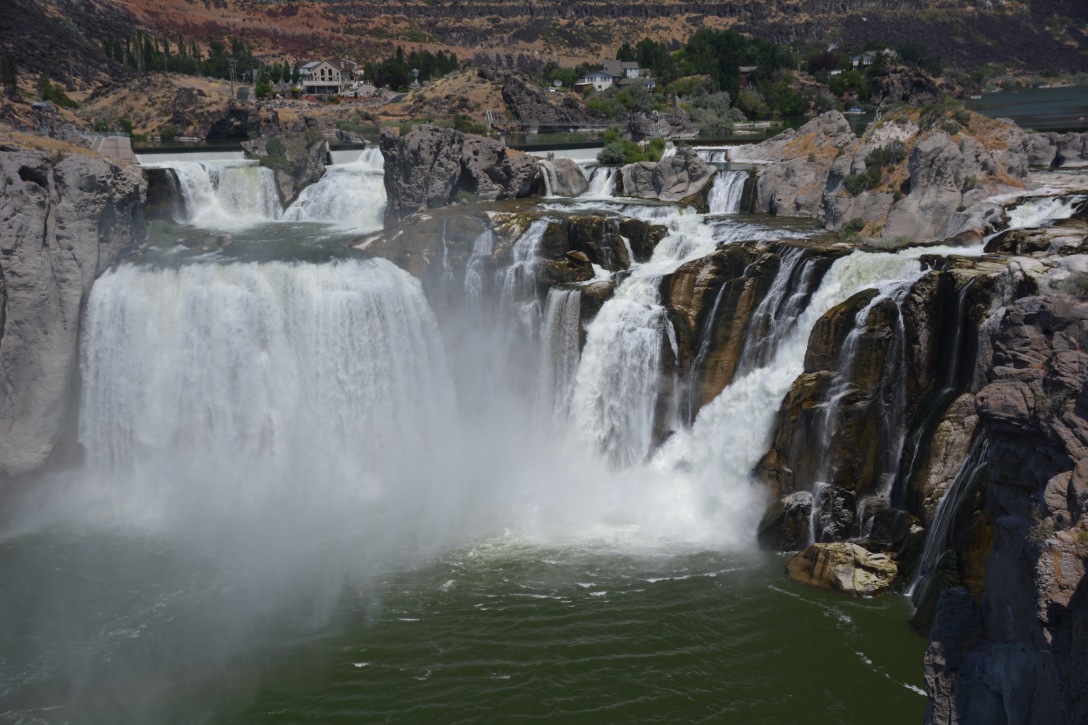 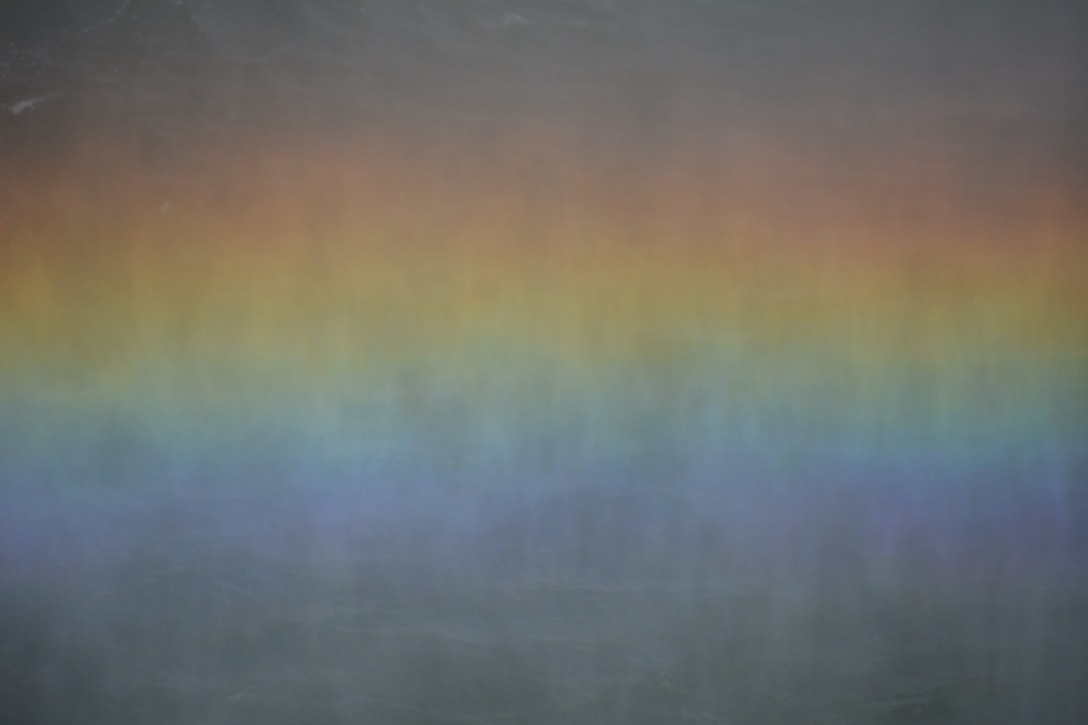 Standing in front of the falls I felt as if I were in a David Lynch film.  Here I am, looking at something so perfect, so wholesome (there’s rainbows being drawn in the mist and everything!), but who knows what oddities there are in small town America (I immediately considered the town “bison hoarder” to be the town’s Twin Peaks-ian log lady).  It’s just the kind of place where fiction meets fantasy.  And after having woken up in an alien wasteland that morning, the day felt fittingly like something out of a novel.

Darth Brooks and Garth Vader completed. Which do you identify with more? #starwarsgoescountry #idontdofaces
Just a jelly on his stoop, handing out treats to the little jellies #happyhalloween
Dotfinity
In his natural crabitat #barkingcrab
Felt like fall during today’s edition of #girlsnwaterfalls
These puppies arrived at the house today from an anonymous source. I think my work fam is behind these piñatas, but I may have to bash myself open to find out #bestweddinggift
Elopement photos came in and oh-my-gosh-so-pretty-squee-sounds #desertelopement
Was weirder than it looks
A whole lotta white #wanderlust
Went into the desert and did the thing where we tied the knot #desertelopement
Where’s the Carl?
Ex-Philadelphia resident finally says hi to the 🔔 #oursecondselfie
This is how I weekend: 1) Finishing up “Figgy Stardust” 2) Freshly baked Kardemummabullar 3) Gaiman and Odin
%d bloggers like this: