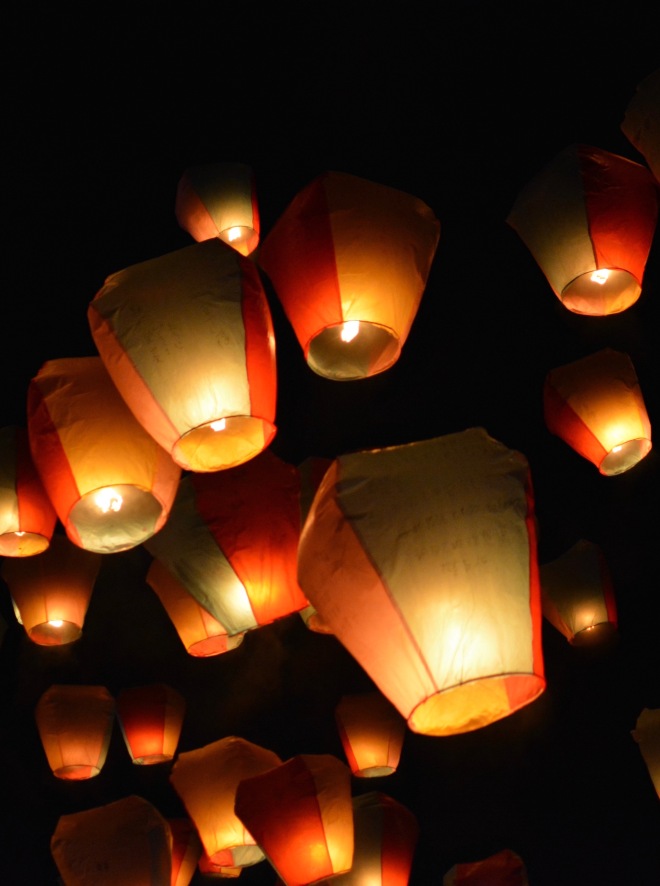 Attending a lantern festival always seemed to me one of those adventures that fits into the idea of a “lived life”, like seeing the Northern lights or sky-diving. The kind of event that when seen in a credit card commercial makes me think “yeah, I need to spend money”. In short, it’s not a byproduct of travel, it’s inspiration for it. Taiwan’s annual Pingxi Lantern Festival inspired my husband and I so much that we planned the start of our honeymoon around it.

The festival takes place an hour outside of Taipei on the 15th day of the first lunar month of the Chinese calendar, in the town of Shifen. Thousands come into the town each year between February and March for the festival, for a bucket list worthy chance to watch the night sky light up and send their own wishes up and away to be answered by their ancestors.

I spent some time researching lodging near Shifen, curious if it was worth it to spend the night nearby rather than commuting to and from Taipei, and it’s not worth the effort. Commuting from the city is far easier than anticipated and there are few walkable lodging options near the festival, not to mention many hotels have sites in Taiwanese Mandarin that don’t translate well. Taipei has tons of great (and affordable!) places to stay, so best to just hole up there. You’ll want some time to explore the city’s teahouses and sights anyway, so get cozy wherever you end up.

At 11am the day of the festival, we hop on a train from Taipei’s main station to the town of Ruifang, then immediately board a shuttle for Shifen. The train tickets cost no more than $15 for the two of us, with the shuttle adding only a buck on top. Taipei’s trains are incredibly punctual and seldom late (having lived in Philadelphia and dealt with Septa, I’m nothing short of amazed by this).

There’s no wait between detraining and shuttling, and even without speaking the language the system in place is easy to navigate:  Trust in the crowds. When you see a mob head towards a shuttle, follow them. Everyone is at the station for the same reason you are and everyone is trying to go to the same place you’re going. The whole process can be a bit uncomfortable, but while visiting a foreign country to do something extraordinary, comfort shouldn’t be the goal. When boarding and someone says the fee is 15 Taiwanese New Dollars (roughly 50 US cents), hand over the coins, get on the bus, and that’s that. A five minute walk from the shuttles drop-off point is all that’s needed to get into town. 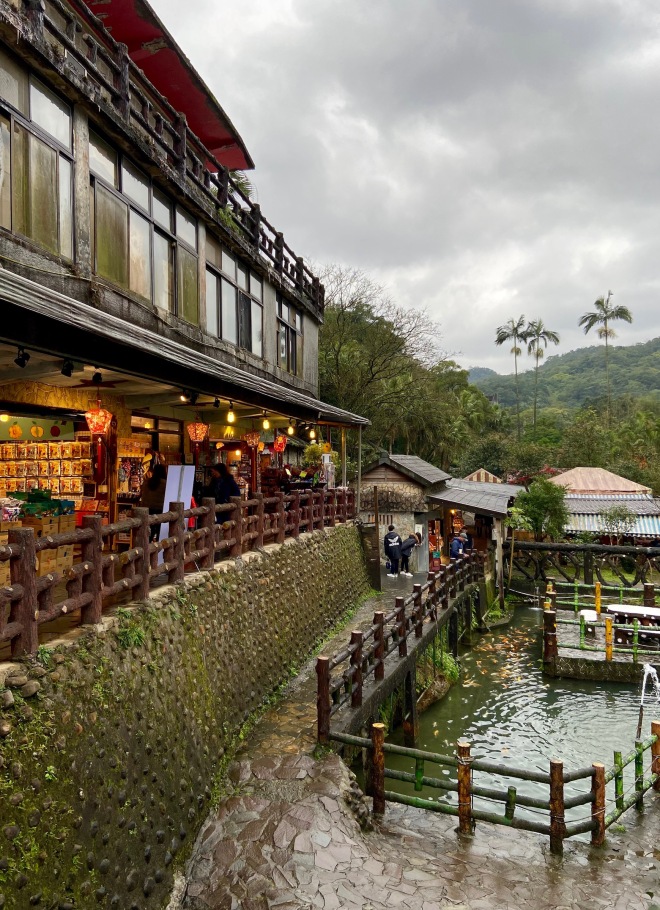 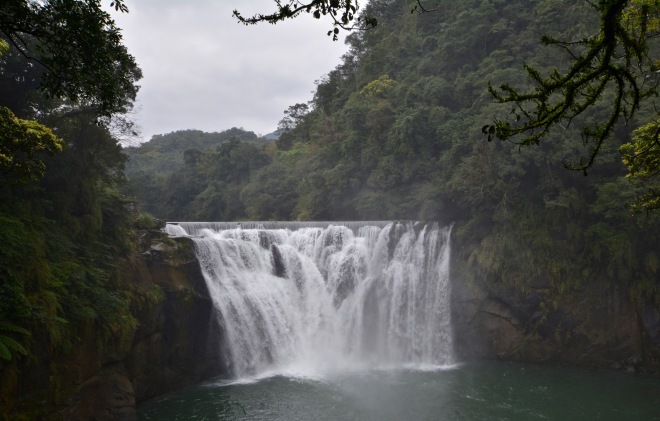 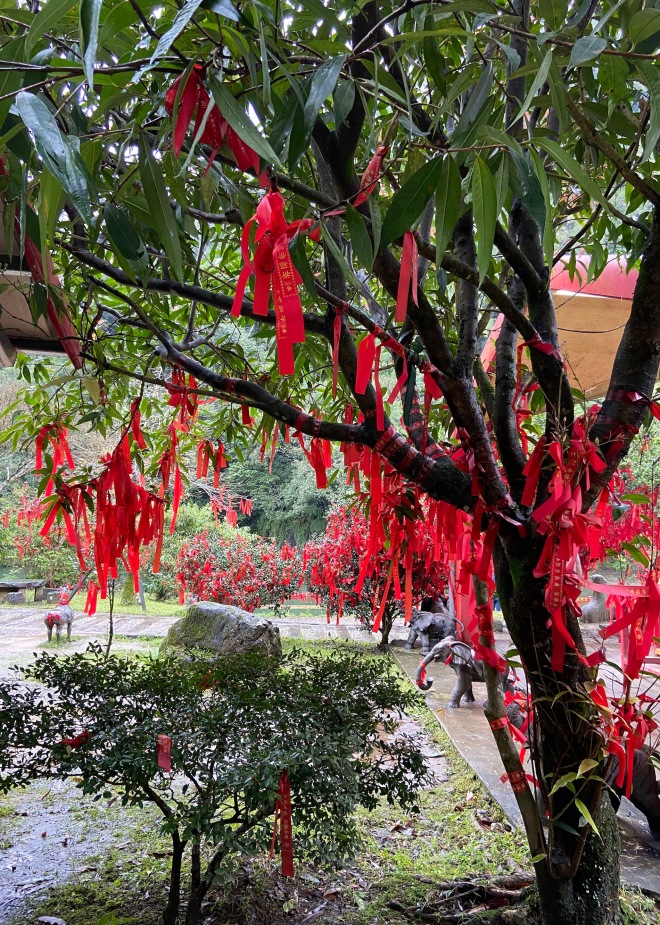 Getting an early start is key when attending the festival. It ensures there’s time to sign up for a group lantern release and head into the main square early to snag a prime spot. Shifen is an adorable town that’s worth a visit any day of the year and going early also allows for a chance to see its waterfall, adorably dubbed the “Little Niagara of Taiwan”, and to watch visitors release lanterns in Shifen’s old street. 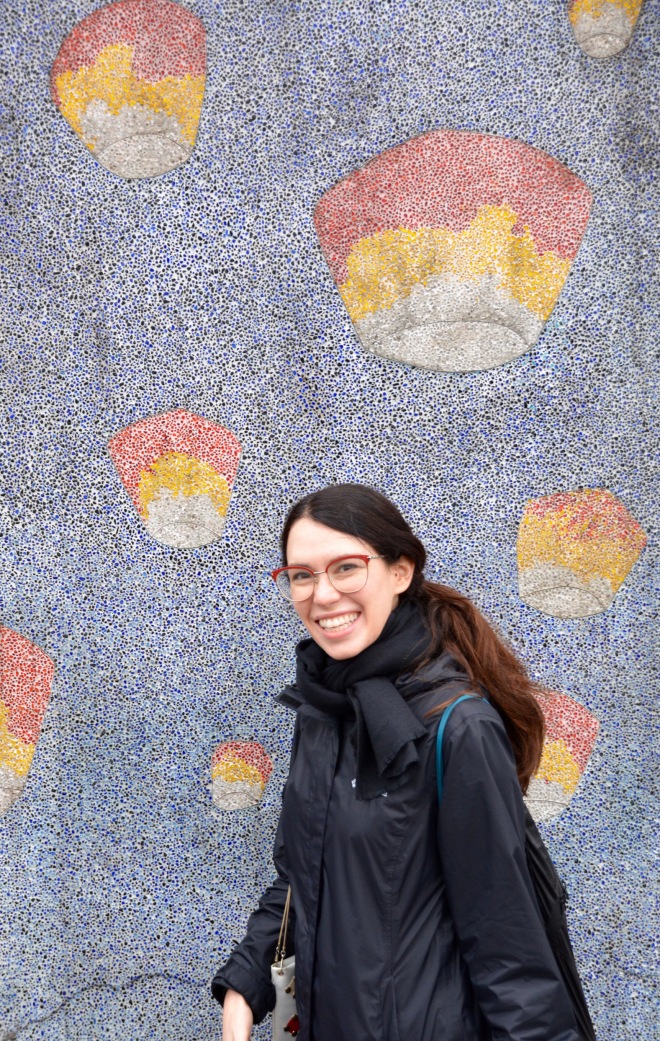 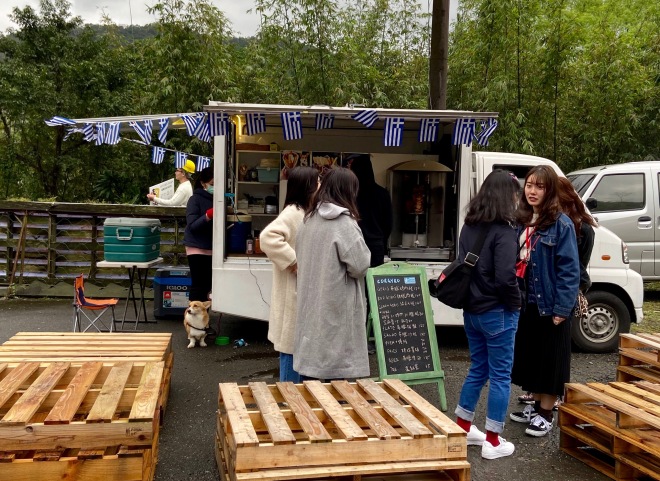 2020’s festival features a food truck roundup where we nosh on piping hot americanos, spicy fried chicken, rice bowls and a damn good slice of pie. During our feast we even watch a very content corgi receiving pets from patrons of its eponymously named “Corgyro” food truck. 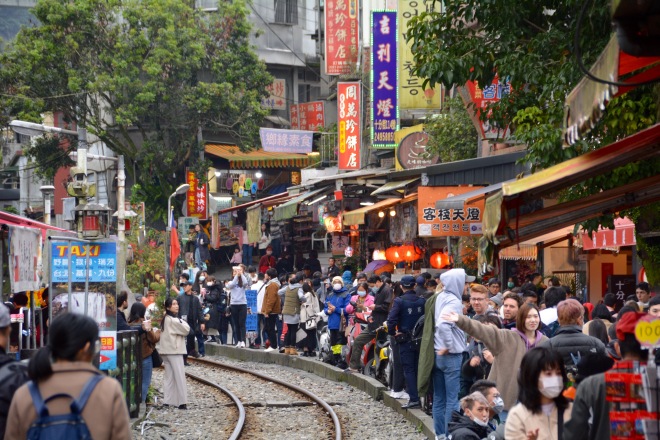 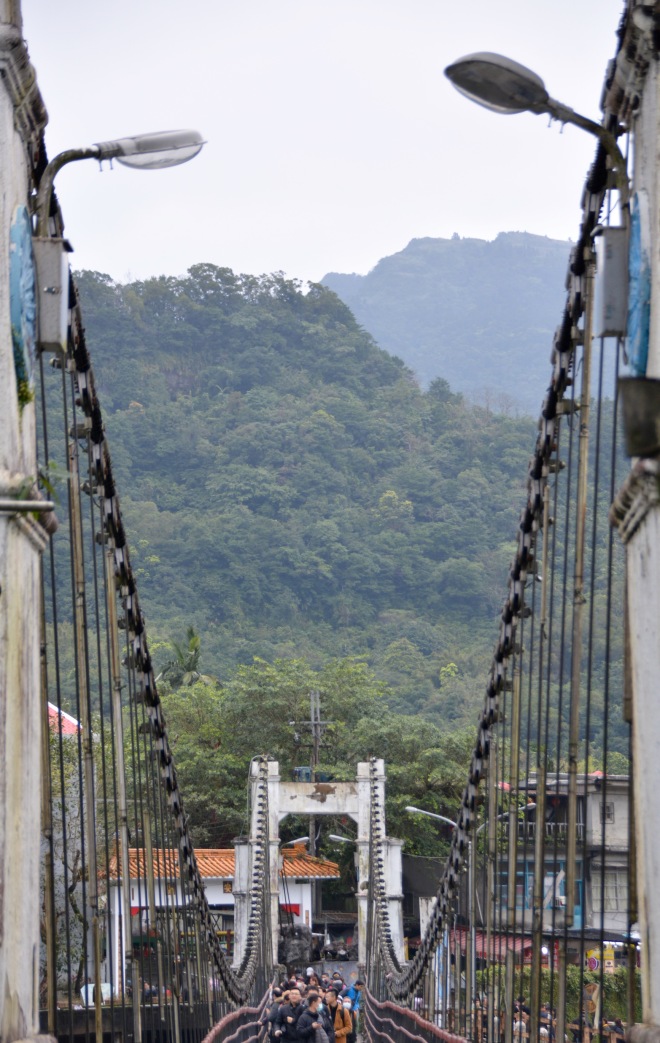 Visitors familiar with the lantern festival are likely less focused on the individual lantern releases and more so on the group releases, where 100+ lanterns are launched in one-go. Anyone can come into town and release their own lantern in the main street, but releasing a lantern in a timed release requires an early start. We arrive in town at 11:30am and already spots are reserved until 7:40pm. Timed releases begin around 7pm, ending about 8:30, with releases occurring every 20 minutes in between. We see the signup tent on the walk from the old street towards the main square where the releases occur. A poster board announces which time slots are still available and while the system isn’t fancy, gauging by the clockwork groups ushered in and out of the square later, it’s highly effective. 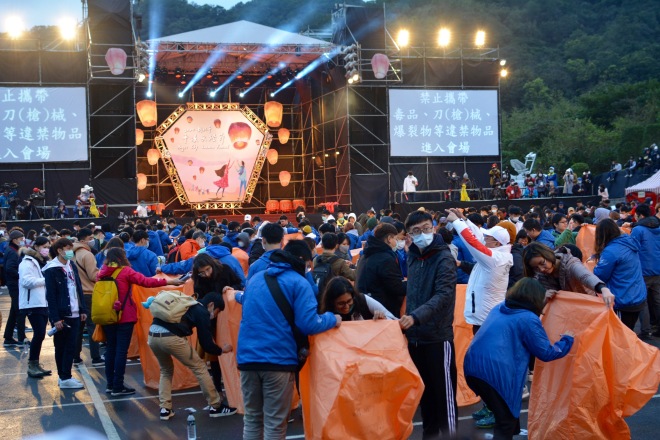 The releases are color coded, each color signifying different goals for the year ahead. If you’re hoping for fulfillment in love, aim for the pink release, for health you want white, wealth is orange and so on. If you just want to get in on the fun, go for anything that’s available.

The town is filled with firemen and I’m amazed that this festival has been going on for generations without having to rebuild its old street. Lanterns are lit and released just feet away from wooden storefronts and apartments. They narrowly avoid terraces and signs. Two young women let go of their lantern only to have the wind immediately carry it into an electrical wire — Caught for two seconds, the lantern does a flip then sails into the sky. Within five seconds I watch the duo go from joyful to terrified to relieved. Once their lantern sails free they, and everyone else watching, clap heartily. 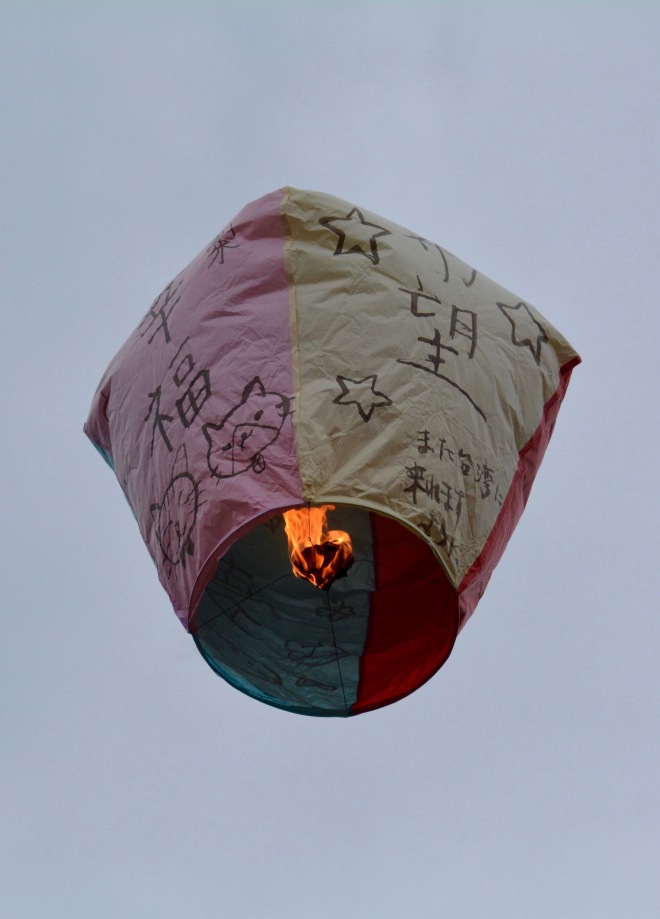 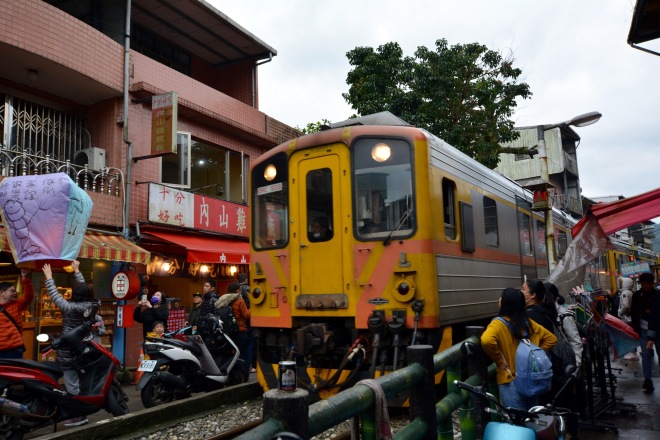 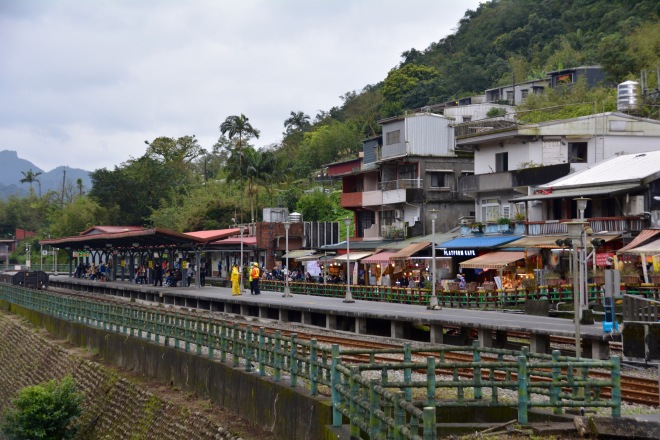 Shifen has made strides towards a more eco-friendly festival. Lanterns are now being made of more biodegradable materials and the town arranges hikes to clean up the refuse. Shuttling into town I spotted several degrading lanterns along riverbeds, but overall I was expecting to see far more damage given the thousands of lanterns released each year.

The process for releasing lanterns in the old street is streamlined. Dozens of local shops advertise pricing (between 5-10USD) and have color-coded guides to help travellers find the match for their desires. Visitors take a minute to paint their wishes onto the lantern before the shop owner lights it, snaps a quick pic of the happy travellers, then off it goes. 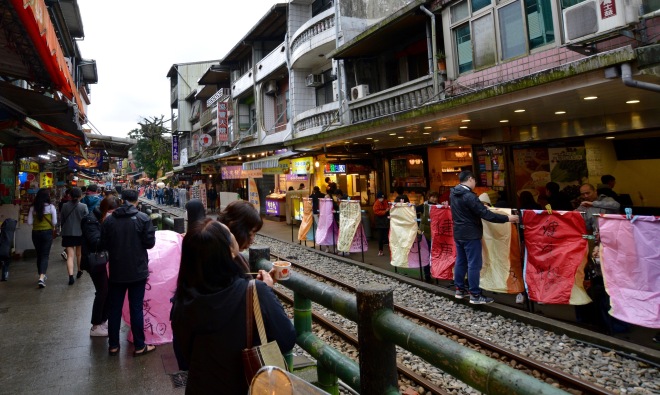 Watching these releases in the old street is lovely. Everyone is so giddy and hopeful for what’s to come. Some wishes are incredibly specific — One young couple writes “jobs abroad” while another decorates their lantern with dollar signs, drawings of bills and “success in business” scrawled out.  But mostly, everyone just wants the same things: Love. Health. Happiness. To work less and be less stressed. To be more present. The festivities are broken only when a train arrives through the center of the street, but resume moments after it passes, bringing a new batch of dreamers within it. 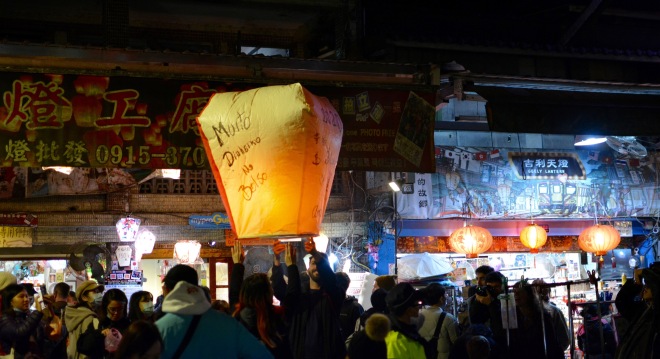 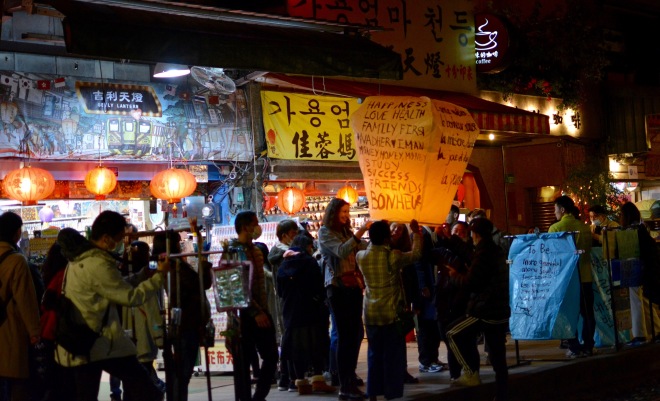 We spent hours happily wandering, watching and eating and when 5pm rolls around we’re ready to head into the main square and stake out our spot for a prime view. The first release is magical. Lanterns sail directly above our heads and float off into nothingness, like watching fireflies ascend into the night. Some lanterns go awry, hitting floodlights. Others catch fire completely and never make it into the air (I fear for the mental state of those whose wishes literally burn away in front of their eyes). Some are released late and float away solo. No matter the outcome it’s a spectacle. 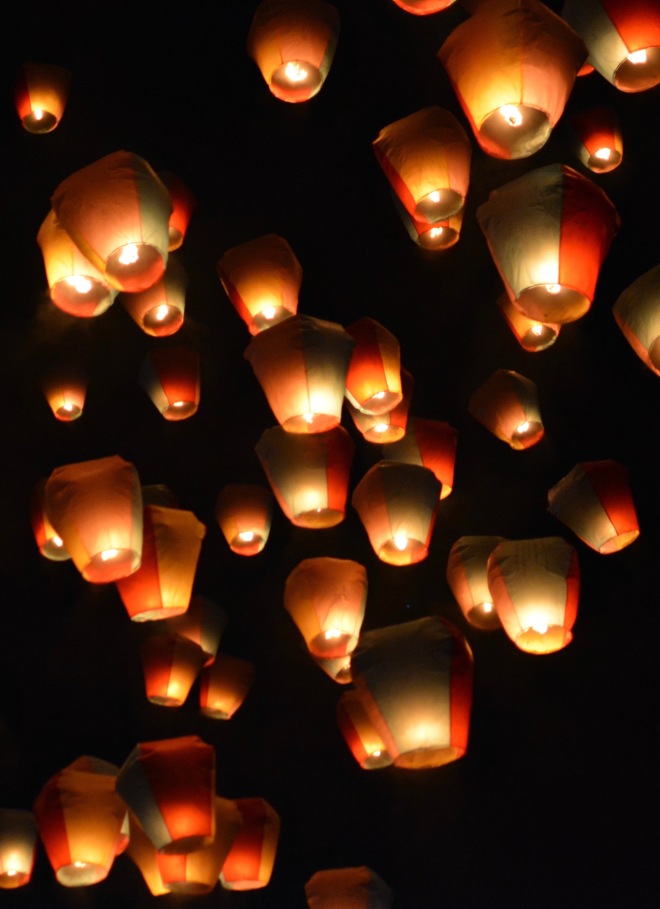 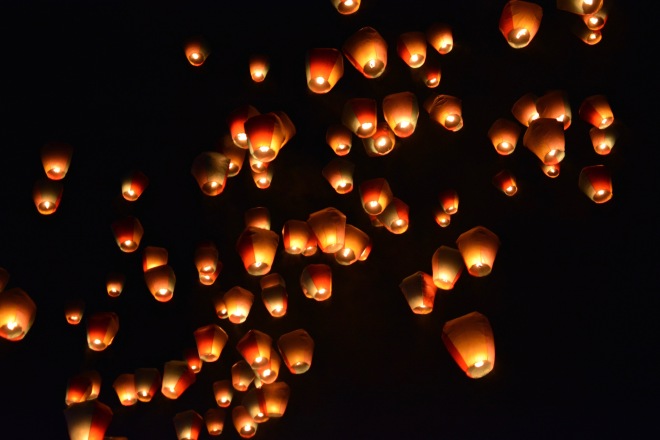 Staking a claim hours in advance may seem absurd, but I didn’t realize just how good we had it until we left the square. After three releases we choose to head back into the old street before returning to Taipei, and leaving the square was the hardest thing we did all day. Hundreds of people are trying to push into the square leaving no space for those trying to exit, so if leaving before the final release you will need to shove your way out. This is not an exaggeration. Be prepared.

Also come with realistic expectations set. There are tons of images online where the sky is veiled by hundreds or thousands of illuminated lanterns — Hundreds in the process of release while hundreds are off in the distance. Those are a lie. There are a little over 100 released at a time, and it’s still completely marvelous to witness, but don’t be disappointed when the entire sky doesn’t glow orange for miles.

Overall, my experience with Pingxi’s festival was much smoother than I expected. I had several concerns, like “What if the train is so full I can’t get back into Taipei?” and  “What if I board the wrong shuttle and wind up in a different town?” There are always a lot of “what ifs” and in the end there was only amazement at how well it all went.

Catching a train back to Taipei we have a 10pm scarf-fest on a bubble milk tea avalanche at Ice Monster. Watching my husband close his eyes and savor a spoonful of the finest of finely shaved ice is the perfect finish to the festival. Sometimes sitting still is all that’s needed to let the day’s festivities turn into memories. 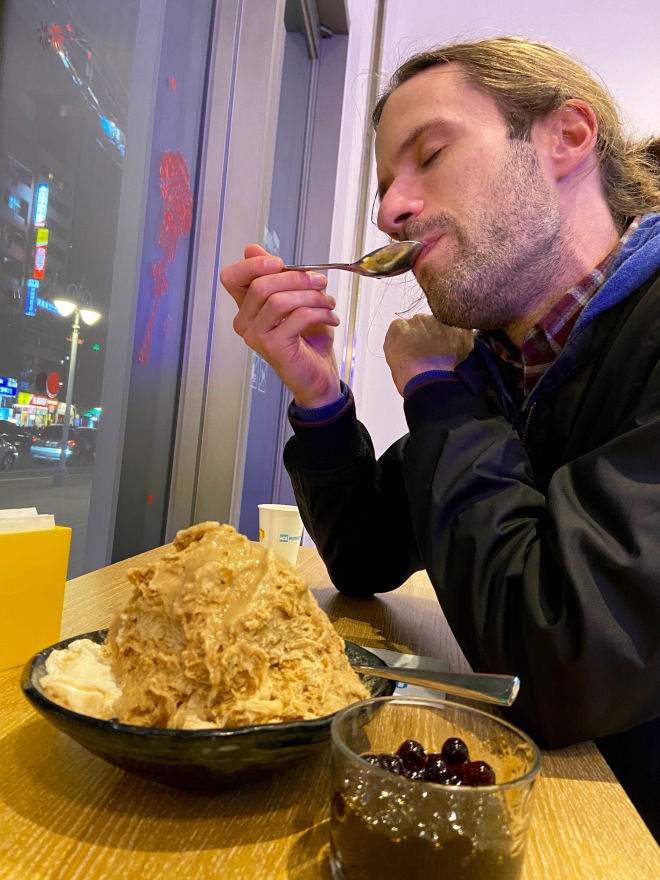 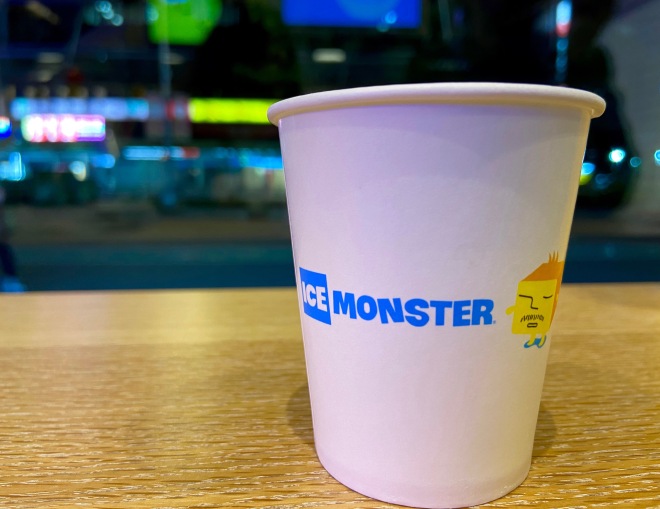