The Colors of San Juan

At 5:00pm we pass a parrot bar. The door is made of the heaviest wood but it’s wide open. Revealed within sits a woman, early sixties with the whitest hair woven tightly into a bun. She’s drowned by the pearls wrapped round and round her neck, nearly weighted down by them as they clash against the black dress she wears. Formal but not too formal, like she just returned from a funeral or has been in mourning for years. Beside her is a cockatoo, poised on a wooden stand. Across sits a man, thirties. He’s a deep black, donning an off white shirt that’s unbuttoned halfway down the chest. Beside him is a macaw, plumed in scarlet.

Behind them is a bar gleaming with coupe glasses and stocked with bottles of amber rums and molasses colored whiskies. The man, the woman and the birds stare at us silently as we look inside. Too intimidated to step inside we keep walking. Not entering, along with not buying that pair of kneehigh fuschia boots I saw in a London storefront at 16, are two of the greatest regrets of my life.

This is San Juan, Puerto Rico. July 2017 — two months before Maria deprived the country of power and took over 1400 lives. Old town is alive at dusk in a way that’s equally exhilarating and comforting. Towards the ocean a street swells with salsa dancers. They press against one another tight as can be as the song plays and part ways at its finish, stopping for swigs from Medalla Light bottles.  It may not be fancy but it feels, dareisay, genuine? No one is staring at their phone, everyone is engaged in what and who is around them. 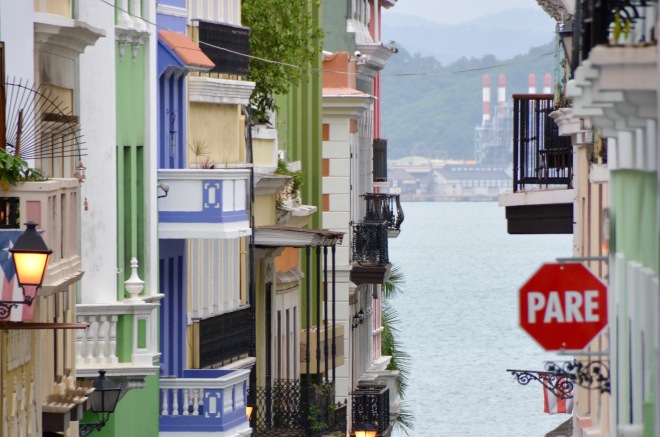 Again, we don’t walk in and order a drink. We can just make out the horizon of the ocean peeking through the alleys. While still blue, the sky is just beginning to transition into pink, which colors the cobblestones coral and deepens the hues of the pastel houses around us, turning light blues to cobalt.

Upon our arrival at the ocean we’re met with a perfectly cotton candy sky. Palm trees move languidly in the breeze. The smell of salt isn’t as pungent as it’s been in other sea towns, and I attribute this to being on an island. At heart I’m not a beach person, and most of my visits to the ocean are due to the family vacations of my youth, but while I don’t spend a lot of time on islands, Puerto Rico feels like an island. Although the Atlantic is right ahead, I feel like I could turn around, go a couple of blocks, and meet the ocean all over again.

A group of twenty-somethings play basketball on a court overlooking this view. I wonder if they know just how gorgeous this all is — the sea and the sky. Or if this has just become habit. “Let’s meet at the court on Fridays”. In all our lives there are things that can start to feel mundane, but are glorious to an outsider: the chirping of crickets, church bells on an otherwise silent Sunday, a busy city street just after the rain. Things we’d miss immediately were they to suddenly disappear, and never be able to pinpoint just what’s different.

There were a fair amount of firsts in San Juan for me — my first rum that made me say “Oh, I don’t hate rum”. A rich and thick hot chocolate topped with… a strip of cheddar cheese. A coconut taken from the beach, cracked open against a rock, and eaten on the walk back to our hotel. Group yoga on the bay in front of a couple thinking they were having discreet sex in the waters yards away. 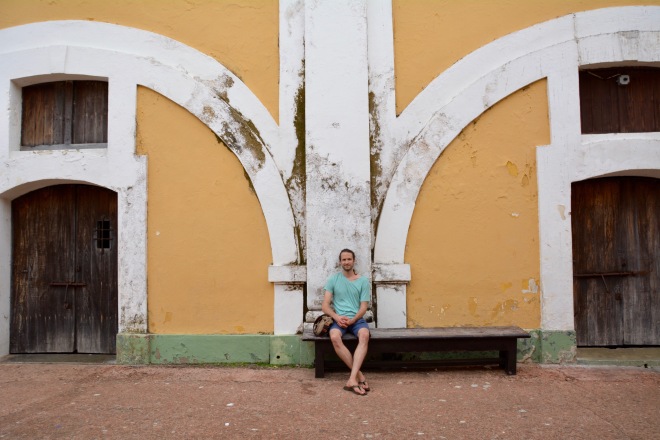 Guidebooks can plan a trip, but they’re never able to account for the sights waiting just around the corner from the main attraction. They can take you to the Castillo San Felipe del Morro where you can get your US National Parks Passport stamped, but you’re taken aback by the cemetery that’s in view from the fortress where the deceased rest eternally next to a palisade. They’ll take you to a 15-course dinner in Old Town, and while I cannot remember a single dish I was served, I’ll never forget the gaze of the patrons of the parrot bar nearby.